Polyarteritis nodosa (PAN) is a systemic necrotizing arteritis of the medium vessels first described by Rudolf Virchow in 1847 and further explored by Karl Rokitansky and Adolph Kussmaul (1-3). It can impact a single organ or lead to multiorgan failure although it is known to spare both pulmonary arteries. It is associated with infections [most known with hepatitis B virus (HBV), and other viruses like hepatitis C virus (HCV) and human immunodeficiency virus (HIV) (1)] and other entities like connective tissue diseases, with a genetic background and within lymphoproliferative disorders.

Mean age at diagnosis is typically in the third decade of life and manifestations can include purpura, erythematous subcutaneous nodules, livedo reticularis, ulcers, and/or mononeuritis multiplex. Non-specific symptoms such as fever, headache, myalgias, and malaise can occur (4). Kidneys can indirectly be affected causing hypertension or renal failure. The gastrointestinal (GI) tract can be affected causing ischemia, pancreatitis, appendicitis, cholecystitis, ileitis, hemorrhage, or even bowel perforation (5). Bowel infarction in PAN can lead to acute abdomen and intrahepatic sclerosing cholangitis (6).

Inflammatory bowel disease (IBD) has been associated with cutaneous disorders including but not limited to reactive disorders such as erythema nodosum, pyoderma gangrenosum, and cutaneous PAN. These can precede, occur with, or happen after development of IBD. Immunoglobulin changes have also been seen in patients with IBD. To our knowledge no case reports have shown demonstrated a patient with immunoglobulin G (IgG) deficiency presenting with medium vessel arteritis and subsequent development of IBD. We present a unique case of a patient whose initial presentation of IBD manifested with erythema nodosum-like features along with IgG deficiency, requiring a full workup to define this association. We present the following article in accordance with the CARE reporting checklist (available at https://dmr.amegroups.com/article/view/10.21037/dmr-22-31/rc).

We describe a case of a 64-year-old male with past medical history (PMH) of non-Hodgkin’s lymphoma stage 3 status post-1 cycle of R-CHOP and maintenance with rituximab therapy, currently in remission, IgG deficiency, and osteoarthritis that initially presented to rheumatology clinic after being admitted on March 16, 2020 for a non-healing ulcer surrounded by erythema on right leg. Obtained wound cultures grew Stenotrophomonas maltophilia for which he was started on trimethoprim/sulfamethoxazole (TM/SMZ) 160 mg/800 mg. Immunoglobulin IgG levels were found to be 468.1 mg/dL and he was given intravenous immunoglobulin (IVIG). Punch biopsy was obtained, and TM/SMZ was continued as outpatient. He then developed two new purple-colored lesions on the anteromedial sides of his right ankle 1 week later on March 23, 2020. He was placed on prednisone taper 20 mg × 20 days and given amoxicillin/clavulanate, 875 mg × 1 week. Pathology resulted on March 7, 2020 as infiltrates of neutrophils and mononuclear cells in the wall of an arteriole, with fibrin deposition and subcutaneous inflammation, which was confined near the affected vessel, suggestive of medium to large vessel vasculitis, PAN (Figures 1,2). Deep aspects of the dermis showed vasculitis with leukocytoclasis with intimal fibrin deposition and extensive necrosis (Figure 3). Computer tomographic angiogram (CTA) of chest, abdomen, and pelvis revealed no ischemic colitis or arteritis. He then developed episodes of rectal bleeding on June 18, 2020 and underwent a colonoscopy that showed internal hemorrhoids and linear ulcerations in the terminal ileum extending proximally at least 20 cm and a single ulcer in the sigmoid colon. Biopsies showed active ileitis with ulcer in terminal ileum and right colon biopsy showed colonic mucosa with focal cryptitis consistent with a diagnosis of IBD. 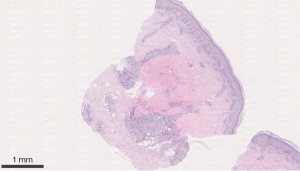 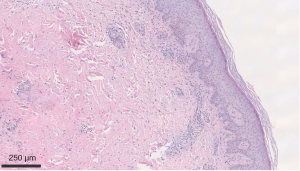 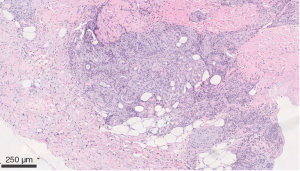 Magnetic resonance enterography (MRE) performed 3 days later on June 21, 2020 showed diffuse wall thickening of the terminal ileum measuring 9 cm compatible with active terminal ileitis. Fecal calprotectin was elevated at 588 µg/g (reference range, 0–120 µg/g). Serology for antineutrophil cytoplasmic antibodies (ANCA), anti-myeloperoxidase, double-stranded DNA (DS-DNA), antinuclear antibodies (ANA) test, and angiotensin converting enzyme (ACE) levels were all negative. Lactic dehydrogenase (LDH), T, and B cells levels were unremarkable. Serum protein electrophoresis (SPEP), urine protein electrophoresis (UPEP), and B2 microglobulin were unremarkable. He was continued on prednisone 20 mg × 10 days followed by 10 mg × 10 days. He was then started on 12-week course of budesonide 9 mg once daily for terminal ileitis. He felt much symptomatically better and improved on Budesonide and prednisone taper with resolution of rectal bleeding and no further development of lower extremity ulcers on follow up visit on October 6, 2020. The timeline of diagnosis and subsequent therapies in this case are illustrated in Figure 4.

All procedures performed in this study were in accordance with the ethical standards of the institutional and/or national research committee(s) and with the Declaration of Helsinki (as revised in 2013). Written informed consent was obtained from the patient for publication of this case report and the accompanying images. A copy of the written consent is available for review by the editorial office of this journal.

PAN is a medium sized vessel vasculitis, manifesting either as a single organ (cutaneous) or systemically. The connection between IBD and PAN is one of conflict but has been demonstrated in case reports since 1970. Komatsuda et al. described a patient with a 4-year history of Crohn disease that developed PAN which improved with steroids (7). Goslen et al. described a case of cutaneous PAN with immune complexes measured by c1Q binding associated with Crohn disease successfully treated with cyclophosphamide and prednisone (8). Gudbjörnsson and Hällgren described a woman with biopsy proven PAN that developed Crohn disease 6 years later (9). Treatment is typically systemic corticosteroids combined with cyclophosphamide or azathioprine.

Both pathologies are a result of an immune dysregulation. One caveat is that ileitis is a finding in PAN alone. Although ileitis is classically caused by Crohn’s disease, infectious diseases such as yersinia or mycobacterium tuberculosis may cause it. Vasculitides such as systemic lupus erythematosus, PAN, Bechet’s disease, and Henoch-Schönlein purpura have been connected to ileitis (10). Pathology of the colonic mucosa in our patient showed only capillary involvement, making primary PAN a less probable cause of ileitis.

Our patient had IgG deficiency that was treated with IVIG. This deficiency likely due to previous Rituximab therapy may have predisposed him to development of IBD. Remarkably, alterations in immunoglobulin subclass concentrations have been found to occur in patients with active, untreated IBD (11). Poorer outcomes also occur in these patients with low IgG (12). Furthermore, PAN presenting in a genetical disorder of deficiency of adenosine deaminase 2 (DADA2) and manifesting with PAN-like features early in life with hemorrhagic and ischemic strokes have a similar feature of hypogammaglobulinemia (13-15). However, our patient’s features were not consistent with DADA2 mutation.

Case reports have also demonstrated primary antibody deficiency in patients with radiologic and histological proven Crohn’s disease (16). To our knowledge, no case reports have demonstrated development of PAN in a patient with IgG deficiency and the development of IBD thereafter. Our patient improved with steroid therapy and IVIG treatment and had no further progression of his PAN. Later, specific therapy for IBD was started.

Limitations of this case include that this patient may have already been predisposed to development of PAN even without immunoglobulin deficiency. Additionally, the prior history of lymphoma may have been related to the development of IBD as a higher risk of lymphoma has been noted in patients with IBD (17). Subsequent immunoglobulin levels were also not checked after IVIG treatment which may have been helpful. Strengths of the case study include pathological studies of both the skin and colonic tissue to allow more accurate delineation of the association between PAN and IBD.

The association between acquired immunoglobulin deficiency and PAN in the context of IBD requires further research and is important to consider upon diagnosis of either entity. Immunoglobulin testing may prove useful when diagnosing PAN and IBD- related disorders as early treatment can result in a favorable prognosis.

Reporting Checklist: The authors have completed the CARE reporting checklist. Available at https://dmr.amegroups.com/article/view/10.21037/dmr-22-31/rc

Conflicts of Interest: All authors have completed the ICMJE uniform disclosure form (available at https://dmr.amegroups.com/article/view/10.21037/dmr-22-31/coif). RAPW reports funding from Horizon Pharmaceuticals previously. The other authors have no conflicts of interest to declare.

Ethical Statement: The authors are accountable for all aspects of the work in ensuring that questions related to the accuracy or integrity of any part of the work are appropriately investigated and resolved. All procedures performed in this study were in accordance with the ethical standards of the institutional and/or national research committee(s) and with the Declaration of Helsinki (as revised in 2013). Written informed consent was obtained from the patient for publication of this case report and the accompanying images. A copy of the written consent is available for review by the editorial office of this journal.