Relapse of ulcerative colitis in a patient with Takayasu arteritis treated with tocilizumab and tacrolimus―successful induction with infliximab: a case report

Takayasu arteritis (TAK) is a form of vasculitis that primarily affects the aorta and its large branches such as carotid, renal, and subclavian arteries (1). TAK was first reported in 1908 by Japanese ophthalmologist Mikito Takayasu (2). Although TAK has been reported all over the world, it is more prevalent in Asian countries. The prevalence is estimated to be the highest in Japan, at 40 per million (3,4). It is 22.0 in Norway, 13.2 in Sweden, 12.8 in Turkey, 10.5 in Spain (4), 7.0 in Shanghai (5), and 4.7 in the UK (4). It is the lowest in the US at 0.9 (4). Symptoms appear at an average age of 25±12.5 (SD) years (1). The majority of cases are female (9:1) (6). Symptoms are based on the arteries affected and range from asymptomatic to severe or even death (7). Imaging modalities including ultrasonography, computed tomography (CT), angiography, magnetic resonance (MR) angiography, and fluorodeoxyglucose positron emission tomography (FDG-PET) contribute to the diagnosis and evaluation of TAK (3,6). Treatment usually begins with corticosteroids (3). Tocilizumab [an anti-interleukin (IL)-6 receptor antibody] is used for patients with an insufficient efficacy with corticosteroids (8). TAK is not generally described as an extraintestinal complication in inflammatory bowel disease (IBD). However, TAK was found in 6.4% (30/470) of cases with ulcerative colitis (UC) in Japan (9). This percentage is much higher than the 0.004% in the general population in Japan (3,4). The co-occurrence is thought to be due to a genetic background sharing HLA-B52 and IL12B (7,9).

Here, we present a case of co-occurrence of TAK and UC. UC recurred in this case during treatment with tocilizumab and tacrolimus for TAK. These two drugs were reported to be effective for treating UC (10,11). We present the following article in accordance with the CARE reporting checklist (available at https://dmr.amegroups.com/article/view/10.21037/dmr-22-33/rc).

A 42-year-old woman was transferred to our hospital in November 2021 for the treatment of relapse of UC. UC was initially diagnosed at the age of 11 (1990). The patient had severe relapse of extensive colitis at the age of 18 (1997), which was treated medically, including 3 weeks of total parenteral nutrition, at a university hospital. At the age of 35 (2014), the patient experienced left neck pain. Examination revealed stenosis of the left carotid artery, abdominal aorta, and renal arteries. Type V of TAK was diagnosed (12). Tocilizumab was approved for treatment of TAK in August 2017 in Japan. Addition of tocilizumab to prednisolone (4 mg/day) and tacrolimus (2 mg/day) resulted in full control of TAK. Tocilizumab, 162 mg/0.9 mL, was subcutaneously injected biweekly at the time of the patient’s transfer. The patient also took aspirin for TAK (3). FDG-PET performed in May 2021 showed complete remission of TAK.

There was no relapse of UC requiring hospitalization since 1998, and stopped visiting a gastroenterologist after 2014. Mesalazine, 2 g/day, was continued for maintenance of UC by a rheumatologist, but there were a few mild relapses, i.e., blood attached to stool and/or loose stool, recently. Because the patient refused to consult a gastroenterologist, the rheumatologist managed the patient’s relapses by drug holidays or reducing the dose of tocilizumab, and/or increasing the prednisolone from 4 to 10 mg/day. In October 2021, the patient started making visit to the patient’s hometown to take care of the patient’s sick father, which changed the patient’s lifestyle. In the beginning of November 2021, the patient visited an emergency room after experiencing bloody stool. The rheumatologist increased the dosage of prednisolone to 20 mg/day. However, diarrhea with blood continued. Despite the patient’s poor condition, the patient kept going back and forth between the patient’s home and the patient’s father’s home. The patient then experienced left abdominal pain and dizziness, which prompted another visit to the emergency room. Decrease of hemoglobin from 12.8 to 8.6 g/dL was found (Table 1), and the patient was emergently admitted (Figure 1). Two units of red blood cells were transfused. On the following day, colonoscopy revealed moderate active inflammation (Figures 1,2A). After 3 days, during which drip infusion of 3,000 mL/day was administered without meals, the patient was transferred to our hospital for treatment of UC. Medication at the time of transfer was prednisolone 10 mg/day and mesalazine 2 g/day for UC. 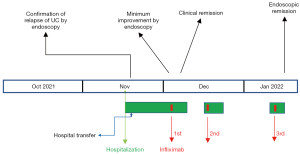 Figure 2 Colonoscopic images in the distal descending colon. (A) One day before admission to our hospital. Diffuse inflammation, redness, edema, and white adherent mucous, without a normal vascular pattern, were observed. (B) 13th hospital day. The minimum improvement compared to A. (C) After induction therapy with infliximab. A normal vascular pattern was restored.

Since the patient had an appetite, 800 kcal/day of a plant-based diet (PBD) (semi-lacto-ovo-vegetarian diet) with fish once a week and meat once every 2 weeks, both at about a half of an average amount, was provided (15). The total calorie was gradually increased to 2,000 kcal/day. Plant-based diet score (PBDS) of the PBD, which evaluates an adherence to PBD, a higher PBDS indicates greater adherence to PBD, was 35 (16) (Table 2). The patient ate the PBD without hesitation. Five hundred ml of drip infusion was decreased day by day. All previous medications for TAK and UC were continued. It seemed to a favorable course. However, blood attached to stool was found on 8th and 13th hospital days. Colonoscopy revealed active inflammation in the left colon with minimum endoscopic improvement (Figures 1,2B). For the induction of UC remission, standard infliximab therapy was chosen (17). Since infliximab is expected to be effective for TAK (18), tocilizumab was stopped. The first infliximab infusion (300 mg) was administered on the 17th hospital day (Figure 1). Normal stool without blood was confirmed on the 22nd hospital day, and the patient was discharged on the 23rd hospital day (Figure 1). The patient’s baseline PBDS was 19. It decreased to 9 after the patient’s lifestyle change before relapse (Table 2). The patient received dietary guidance on the PBD and was advised to continue the PBD after discharge. The second and third infliximab infusions for the induction therapy were administered 2 and 6 weeks later, respectively (Figure 1). The patient had been completely well after the first infliximab infusion. Colonoscopy confirmed endoscopic remission (Figures 1,2C). The patient further appreciated the role of diet by the present relapse, and the patient determined to continue healthy diet for prevention of another relapse. A genetic study was not undertaken. The patient returned to a referrer. No adverse or unanticipated events related to the PBD or the induction therapy with infliximab were observed over the course of treatment.

†, green tea is recommended to drink at home but it is not provided as a drink at the hospital. PBDS, plant-based diet score.

All procedures performed in this study were in accordance with the ethical standards of the institutional and/or national research committee(s) and with the Helsinki Declaration (as revised in 2013). Written informed consent was obtained from the patient for publication of this case report and accompanying images. A copy of the written consent is available for review by the editorial office of this journal.

How to induce remission in UC was the greatest challenge in the present case receiving tocilizumab, tacrolimus, and prednisolone for TAK. Tocilizumab was reported as a new potent biologic for IBD including UC (10). The last two have conventionally used for UC (11). The patient was also receiving mesalazine for UC. Since tocilizumab suppresses C-reactive protein production (19), C-reactive protein was normal throughout. It seemed that the erythrocyte sedimentation rate, which is one of the indicators for evaluating severity in UC (14), was also suppressed by tocilizumab, because it was unusually normal despite moderate severity. Therefore, inflammatory markers commonly used in UC were useless in this case.

PBD alone once seemed to induce remission, but it was insufficient to make it (20). Although the use of infliximab is not currently approved for TAK, its favorable effect has been reported (18). In severe UC cases, we use infliximab rather than prednisolone, which has several disadvantages including long-term usage, considerable relapse rate, and a variety of adverse reactions (17). We previously showed a high remission rate and low colectomy rate (17). Although the present case was not severe, we administered infliximab, which induced remission. Our modality, i.e., infliximab and plant-based diet as first-line (IPF) therapy, showed lower relapse rates in the medium and long term without infliximab maintenance therapy both in UC (17) and Crohn’s disease (21) compared to those of the current standard.

Although TAK is a rare disease, it is observed all over the world. It is not generally described as a systemic (extra-intestinal) complication of IBD, but epidemiology shows significantly higher association of TAK in UC than in general population. We have presented such a case. UC recurred in the present case despite the patient was receiving tacrolimus, prednisolone, and tocilizumab for TAK. These drugs are used for treating UC. Infliximab successfully induced remission. Dietary change toward unhealthy one and anxiety over the patient’s father’s disease seemed to be a critical factor in the current relapse.

The authors thank Mr. Jeffrey G. Stocker for the edit of the paper.

Reporting Checklist: The authors have completed the CARE reporting checklist. Available at https://dmr.amegroups.com/article/view/10.21037/dmr-22-33/rc

Conflicts of Interest: All authors have completed the ICMJE uniform disclosure form (available at https://dmr.amegroups.com/article/view/10.21037/dmr-22-33/coif). The authors have no conflicts of interest to declare.

Ethical Statement: The authors are accountable for all aspects of the work in ensuring that questions related to the accuracy or integrity of any part of the work are appropriately investigated and resolved. All procedures performed in this study were in accordance with the ethical standards of the institutional and/or national research committee(s) and with the Helsinki Declaration (as revised in 2013). Written informed consent was obtained from the patient for publication of this case report and accompanying images. A copy of the written consent is available for review by the editorial office of this journal.