Adenosine triphosphate Binding cassette sub-family B member 4 (ABCB4) gene and its encoded proteins play important roles in bile and lipid transport. It is expressed in canalicular membrane of hepatocytes and is a type of floppase. The protein is a phosphatidylcholine (PC) translocation enzyme that transfers PC into bile, emulsifies bile salts and avoids its injury to epithelial cells of bile duct. Genetic variation can lead to type three progressive familial intrahepatic cholestasis (PFIC3) (1). Patients with PFIC3 could develop cholestasis in infancy, and progressive to cirrhosis and liver failure (2). As noted, PFIC3 is an autosomal recessive disease. Homozygous mutation of both alleles leads to clinical manifestations. An infant with heterozygous mutation of ABCB4 gene and cytomegalovirus (CMV) infection also presented with cholestasis. It was reported here. We presented the following case in accordance with the CARE reporting checklist (available at http://dx.doi.org/10.21037/dmr-20-125).

A 9-month-old girl was brought to the outpatient department by her parents because of “elevated bile acids and gamma-glutamyl transpeptidase (GGT) levels for seven months”.

The baby girl was the second child of a nonconsanguineous Chinese couple and born full-term uneventfully. She had no history of pathological jaundice in neonatal period, neither did her elder sister. At 70 days old, she developed mild jaundice and recurrent vomiting. The liver tests showed as following: total bilirubin 105 µmol/L, direct bilirubin 63.9 µmol/L, aspartic transaminase (AST) 69 IU/L, alanine aminotransferase (ALT) 48 IU/L, GGT 253 IU/L. The CMV DNA lever was 4.03×104 copies/mL and the IgM antibody was positive. She was hospitalized to the local children’s hospital and was diagnosed as cholestatic liver disease and CMV infection.

After two weeks of treatment with ganciclovir and glutathione intravenously, her jaundice resolved and the blood DNA level of CMV was lower than 400 copies/mL. She was discharged with orally prescribed ursodeoxycholic acid (UDCA) and was followed up monthly in the outpatient clinics. The jaundice was not recurrent and she didn’t pass clay-color stools. But the bile acids and GGT were persistently elevated as shown in Table 1. 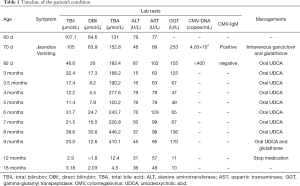 We first saw the baby girl at the outpatient clinics of the Pediatric Department when she was 9 months old. On physical examination, she was active and had normal outlook appearance without jaundice or rashes. The lungs were clear and no cardiac murmurs were heard. The abdomen was soft and not extensive. The liver and spleen were not palpable. No Kayser-Fleischer ring was observed upon examination by an experienced ophthalmologist.

The growth charts were shown in Figure 1. Her motor and language development were normal.

Figure 1 Growth charts of the patient (3): (A) weight-for-age; (B) head circumference-for-age; (C) length-for-age.

Her parents were both 29 years old. The Liver enzymes and hepatobiliary ultrasonography of the parents and elder sister did not show any abnormalities. The parents denied any familiar hereditary history.

The laboratory tests of the patient were shown as below. Liver function tests were shown in Table 1. The CMV IgG antibody was positive and IgM antibody was negative. Blood and urine CMV DNA were negative. The hepatitis viral markers (hepatitis A, B, C, D and E) and Epstein-Barr virus were all negative. Autoimmune antibodies, including antinuclear antibodies were negative. Serum α-1-antitrypsin concentration, coagulation function, and other laboratory investigation results were normal. Hereditary metabolic diseases screening using tandem mass spectrometry showed nothing significant.

Genomic DNA was purified from peripheral blood samples. A resequencing chip dedicated to cholestatic genetic disorders was used to facilitate identification of DNA variance. The result showed that heterozygous mutation of ABCB4 gene on exon 27, c.2906G>A, p.(Arg 969 His). Her father had the same mutation, while her mother and elder sister did not carry the mutation. The baby girl developed symptoms at early infancy, the diagnosis of PFIC3 was considered.

Oral UDCA was continued and “glutathione 0.1 g tid” was added. The bile acid and GGT gradually turned to the normal range without any drug adverse effect. The liver function tests were shown in Table 1. The growth development (as shown in Figure 1) and motor development milestone of the patient were normal. The family was satisfied with the therapeutic result. All procedures performed in studies involving human participants were in accordance with the ethical standards of the institutional and/or national research committee(s) and with the Helsinki Declaration (as revised in 2013). Written informed consent was obtained from the patient for publication of this study and any accompanying images.

We presented a case of infantile cholestasis and analyze the possible molecular pathogenesis. The limitation in the case is that liver biopsy was not performed and the pathological changes as well as specific mechanism needs further study.

Our patient had CMV infection during the early period of infancy, which can cause cholestasis. After antiviral treatment, the CMV IgM antibody was negative and the CMV-DNA copies were negative, suggesting that CMV infection had already been controlled. However, the bile acids still elevated persistently. Other hepadnavirus were negative. Infection was ruled out. Screening of metabolic disorders were negative. Other causes of cholestasis such as genetic diseases should be considered. Exome sequencing showed a variance of ABCB4 gene, which can cause cholestasis.

ABCB4 gene encodes multidrug-resistant protein 3 (MDR3), which belongs to the ABC transporter family and functions as a phospholipid flip enzyme. MDR3 highly expressed on the hepatic bile canaliculi epithelium (6). The PC is transported from the inner side of the bile canaliculi to the outer side by MDR3, forming microcapsules with bile acids to prevent bile acid-mediated injury to bile ducts (6). Lack of MDR3 leads to decreased PC in the hepatic bile canaliculi. Mixed microcapsules cannot be formed. Free bile salts accumulate and damage the bile canalicular epithelium, and then resulting in cholestasis, cholangitis, hyperplasia and inflammatory infiltration of the small bile duct.

ABCB4 gene mutation affects the synthesis and functions of MDR3. A single base deletion (1712 del T) at the homozygous 571th codon, results in generation of termination codon at the following 15th codon, leading to synthesis of inactive truncated proteins (7). Ziol et al. performed liver biopsy and ABCB4 gene sequencing in patients with unexplained cholestatic liver disease, confirming the existence of the ABCB4 mutations, suggesting that many cholestatic liver diseases of unknown causes are associated with heterozygous mutations in ABCB4 genes (8).

There was no jaundice and cholestasis in neonatal period of our patient. In early infancy, bile acids and GGT increased continuously, total bilirubin and conjugated bilirubin increased slightly, while the ALT and AST was normal. Exons sequencing suggested a heterogeneous mutation of c.2906G>A,p.(arg969his) in ABCB4 gene, suggesting the possibility of PFIC3. The father carried the same variant gene, while the mother did not have the mutation, indicating that the variance of the patient was inherited from her father. It’s interesting that the father did not have any symptoms. It has been reported that hepatitis B virus infection may cause down-regulation of ABCB4 gene expression and gallstone formation (13). Similarly, the patient had CMV infection previously. It was hypothesized that a heterogeneous variance of c.2906G>A,p.(arg969his) in ABCB4 gene had residual MDR3 expression, which did not lead to clinical manifestations of cholestasis. However, CMV infection might alter ABCB4 expression, decreased synthesis of MDR3 and further lowered the concentration of PC in bile canaliculi, resulting in cholestasis. The specific mechanism needs further study. Cholestatic diseases caused by ABCB4 gene variation generally onset before 40 years old (14). The patient’s father is now 29 years old and has no clinical manifestation. Regular liver enzymes tests and hepatic ultrasound screening are recommended.

The main management method of PFIC3 is symptomatic treatment, in which the therapeutic goal of infantile cholestasis is to improve liver function, to alleviate symptoms and slowdown the progression of the disease. Oral UDCA, the most commonly used medicine for PFIC3, has been reported to be effective for approximately 60% of PFIC3 patients in normalizing liver tests (15). It is possible that combined with UDCA replacement, the residual phospholipid concentration in bile may be sufficient to reduce bile salt toxicity below a critical threshold. However, large controlled studies on the benefit of UDCA are lacking. Retention of toxic bile acids leads to a fall in glutathione level, an increased expression of inflammatory cytokines and induction of oxidative stress (16,17). Glutathione, which provides important anti-oxidant defense, may play a role in protection of biliary epithelium from bile acids toxicity.

Our patient was prescribed with oral UDCA and glutathione. She seemed to respond better to the therapy than UDCA alone. It is considered that it takes time for UDCA and the residual phospholipid to reach a sufficient concentration. Glutathione contributes to better secretory function of bile canaliculi by protects hepatocytes and bile canalicular cells from bile acids damage. Her bile acids and GGT level were gradually reduced to the normal range. Females who are treated with UDCA and who reach adulthood with their native liver are at risk to develop severe ICP and must not stop UDCA during pregnancy. When UDCA therapy fails, liver transplantation represents the treatment of choice. About half of the patients require liver transplantation at an average age of 7.5 to 11.1 years (18).

Patients with ABCB4 gene variations can result in PFIC3. Persistent cholestasis with unknown reason despite extensive diagnostic work-up or unsatisfactory therapeutic effect should undergo genetic sequencing to identify whether there is mutation of ABCB4 or other genes related to cholestatic liver disease. UDCA and glutathione have certain effects for patient with PFIC3 on normalizing liver function.

The authors would like to thank the family for their participation in the study.

Reporting Checklist: The authors have completed the CARE reporting checklist (available at http://dx.doi.org/10.21037/dmr-20-125).

Ethical Statement: The authors are accountable for all aspects of the work in ensuring that questions related to the accuracy or integrity of any part of the work are appropriately investigated and resolved. All procedures performed in studies involving human participants were in accordance with the ethical standards of the institutional and/or national research committee(s) and with the Helsinki Declaration (as revised in 2013). Written informed consent was obtained from the patient for publication of this study and any accompanying images.