SILS for colorectal cancer was first proposed in 2008. SILS is completed through a single small incision in the umbilicus, approximately 3 cm, through which a multi-channel port is placed for passage of the laparoscope and surgical instruments. The umbilical incision can also be used for removal of the resected specimen. SILS is considered to have superior cosmetic outcomes compared to conventional techniques because it requires only the single incision at the umbilicus.

In 2008, Bucher et al. (1) and Remzi et al. (2) first reported colorectal SILS procedures at about the same time. Takemasa et al. (3) published the first report of SILS in Japan in 2010. Afterward, the number of cases of SILS for colorectal cancer in Japan increased rapidly until 2011, but then increased slowly, and began a downward trend in 2015. At present, SILS is not widely accepted in Japan and its use is limited. The reasons for this are the complexity of the procedure and the lack of confirmation of oncological safety. It will be necessary to standardize the procedure and confirm its safety through randomized clinical trials in order to promote its use in the future.

We present the following article in accordance with the narrative review checklist (available at http://dx.doi.org/10.21037/dmr-21-2).

Previous studies comparing SILS and conventional methods are shown in Table 1 (4-24). All papers in Table 1 were published as original papers between 2011 and 2019. Although many of the studies are retrospective, none of the comparisons between the two groups show significant differences. 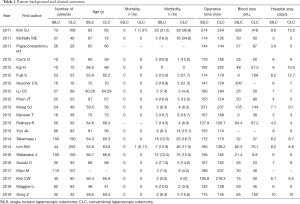 Only one RCT comparing SILS and CLS for rectal cancer has been reported. This relatively small study by Bulut et al. (25) included 40 patients, 20 in the SILS group and 20 in the CLS group, and found that the patients in the SILS group had significantly shorter total incision length and significantly milder postoperative pain in the first four days after surgery. There were no other significant differences between SILS and CLS in terms of perioperative and short-term oncological outcomes, including operative time, blood loss, complications, and operative death. Several other comparative studies with retrospective data have been reported. Perioperative and short-term oncological outcomes in these studies were similar to those of the aforementioned RCTs.

There are very few reports of SILS for rectal cancer, except for recto-sigmoid cancer, because of the difficulty of separating the rectum vertically during rectal dissection using the umbilical approach. In Japan, there are many centers that implant surgical drains after radical surgery for rectal cancer. In our department, a drain is inserted during laparoscopic surgery for rectal cancer, and we perform rectal cancer surgery with SILS plus one port (SILS+1), which is SILS with an additional port placed from the start of surgery in the right lower abdomen, near the area where the drain is planned to be inserted. The extra port in SILS+1 also allows insertion of an automatic suture through the right lower abdominal port, and we believe it is a useful technique because it allows for easy dissection of the rectum in the same way as the conventional method. In about half of the comparative studies, SILS was performed with an additional port, SILS+1, as in our cases.

In the rectum, as the tumor site gets closer to the anus, the resection is more complicated and difficult to perform with SILS. Therefore, it seems reasonable to choose the SILS+1 technique, with the extra port at the planned site for a drain or a temporary ileostomy.

An advantage of SILS is its superiority in terms of postoperative appearance. As noted, the RCT conducted by Maggiori et al. (23) showed that the satisfaction with wounds at six months postoperatively was significantly higher in the SILS group. In addition, because the port is not inserted into anything other than a small incision at the umbilicus, SILS might reduce the risk of wound-related complications such as infection and incisional hernia. Furthermore, SILS has been reported to reduce postoperative delirium compared to conventional methods. Nishizawa et al. reported that the incidence of postoperative delirium was significantly lower in colon cancer surgery patients aged 75 years or older, at 13.8% in the SILS group compared with 30.0% in the conventional method. Although the reason for such a result is not clear, the report suggests that SILS may have reduced wound pain compared to the conventional method, thereby reducing postoperative delirium in elderly patients.

In addition, because of the nature of SILS, the operative field is maintained using only the forceps in the surgeon’s left hand, and it is expected that familiarity with this technique will improve the movement of the surgeon’s left hand. In trans-anal total mesorectal excision (TaTME), which is now rapidly gaining popularity, a SILS is performed with an additional multichannel device inserted into the anus. A scope and two forceps are inserted from the device for manipulation, and because the forceps manipulation is similar to SILS in many ways, we believe that SILS could also be a useful training for learning TaTME.

Disadvantages of SILS include the difficulty of assisting the assistant to the surgeon, the inability to use conventional techniques, such as maintaining a large visual field, and the need to learn dissection techniques specific to SILS. Another disadvantage is that it is difficult to insert additional ports when necessary to deal with bleeding, because the procedure is usually completed by two surgeons, the operating surgeon and the camera operator, which may make it difficult to insert additional ports in the event of bleeding.

The future of single incision laparoscopic surgery in colorectal cancer

Various surgical robots are currently being developed and commercialized in many countries, and it will not be long before a SILS assistant robot is developed that can maintain the field of view or operate the forceps. As robotic capabilities continue to improve in the future, many of the challenges of SILS may be resolved, and single-incision robotic colorectal resection could become a common procedure.

Previous studies have shown that SILS is a safe technique for colorectal cancer in the short term and has a good postoperative appearance. In the future, it is likely to expand as difficulties are eliminated through further standardization of procedures and confirmation by high-quality RCTs of the long-term safety for colorectal cancers. In addition, the application of surgical robots to SILS is expected to bring about further breakthroughs by improving operability and surgical field deployment.

Reporting Checklist: The authors have completed the narrative review checklist. Available at http://dx.doi.org/10.21037/dmr-21-2

Conflicts of Interest: Both authors have completed the ICMJE uniform disclosure form (available at http://dx.doi.org/10.21037/dmr-21-2). YH serves as an unpaid editorial board member of Digestive Medicine Research from Jul 2020 to Jun 2022. The authors have no conflicts of interest to declare.