Solid organ tumours after orthotopic liver transplant (OLTx) are an increasingly important cause of post-transplant mortality, with de novo neoplasia now the most common cause of mortality in patients surviving more than 1 year after transplant (1). Although no population-based incidence estimates for oesophageal carcinoma after OLTx have been published, single hospital series suggest an incidence of 0.1–0.6% (2-6). This is considerably higher than the baseline lifetime incidence of 0.0075% as per the WHO Global Cancer Observatory (7). This increase has been partly attributed to shared risk factors for cirrhosis and oesophageal cancer (3,4,8). Another risk factor not specifically related to liver disease is pre-existing Barrett’s oesophagus, with an incidence as high as 71.4% in a German transplant population (9).

Due to the morbidity associated with oesophagectomy in the healthy patient (10) and considerably increased complexity of any abdominal surgery after liver transplant (11), the decision to proceed with surgical management of oesophageal adenocarcinoma after transplant is a difficult one. Additional patient factors including smoking and morbid obesity may also be considered contraindications to major abdominal surgery without appropriate optimisation. We describe peri-operative management of a 65-year-old male patient with previous OLTx who underwent curative treatment for adenocarcinoma of the gastro-oesophageal junction (GOJ). We present the following article in accordance with the CARE reporting checklist (available at http://dx.doi.org/10.21037/dmr-20-134).

The patient had undergone urgent OLTx two years prior (Table 1), after presenting to a regional hospital with massive variceal bleeding and multi-resistant Staphylococcus aureus (MRSA) sepsis secondary to an ulcerated umbilical hernia and/or lower limb cellulitis. His cirrhosis was caused by hepatitis C virus (HCV) and ethanol abuse and his Model for End-Stage Liver Disease (MELD) score was 20 at presentation. Emergency oesophago-gastro-duodenoscopy (OGD) identified four bleeding oesophageal varices but no Barrett’s oesophagus. After initial stabilisation, he was transferred to the transplant unit of a major hospital. 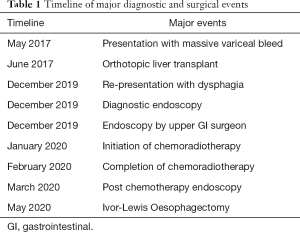 Three weeks later he received his OLTx, which was technically difficult due to his obesity [body mass index (BMI) 39 kg/m2]. Intra-operative blood loss of eight litres was recorded. He had a prolonged post-operative period in intensive care, with multi-factorial acute kidney injury requiring dialysis and hospital-acquired pneumonia requiring prolonged ventilation and tracheostomy. He suffered idiopathic cardiac arrest which responded to advanced life support measures. Prior to discharge from hospital, he had an open repair of an incisional hernia. Immunosuppression at discharge was achieved with tacrolimus and mycophenolate, subsequently reduced to tacrolimus monotherapy by 1-year post-OLTx.

Approximately two years post-OLTx, the patient reported four months of progressive dysphagia, epigastric odynophagia and 2 weeks of regurgitation. The clinician recommended weight loss and outpatient OGD, which did not occur at least in part due to the patient moving interstate. Four months after his initial symptoms, he presented to a regional hospital emergency department in his new state with progression of his symptoms. Physical examination was unremarkable.

Computed tomography (CT) scan of his chest, abdomen and pelvis identified non-specific distal oesophageal thickening (Figure 1). He was admitted and an inpatient OGD identified a circumferential, malignant-appearing lesion causing incomplete obstruction of the GOJ (an ultra-thin endoscope could be passed). There was minimal involvement of the cardia on retroflexion and histology showed adenocarcinoma (Figure 2). 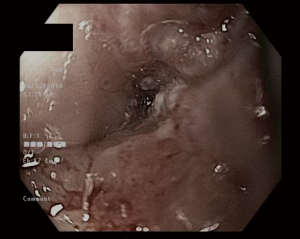 A repeat OGD was performed a fortnight later by an experienced upper gastrointestinal surgeon. The obstructive lesion was dilated with a through-the-scope (TTS) balloon to 15 mm and traversed, and a 7-cm tumour starting at 38 cm was identified (Figure 3). 18F-fluorodeoxyglucose (FDG) positron emission tomography (PET) scan showed avidity of the GOJ lesion but no avid nodes or metastatic deposits. 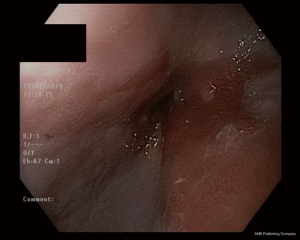 The case was discussed at an upper gastrointestinal multi-disciplinary team meeting and staging was agreed as cT3N0M0 (AJCC8). Discussion centred around his previous complicated OLTx, recurrence of the incisional hernia, ongoing obesity and extensive smoking history (ceased approximately 3 months prior). The recommendation was for curative intent, with neoadjuvant chemoradiotherapy (CROSS regimen; carboplatin/paclitaxel and 41.3Gy/23# radiotherapy) and cardiopulmonary exercise testing (CPET) after to assess fitness for surgery. Re-staging endoscopy after completion of chemoradiotherapy showed a submucosal, ulcerated mass from 37 to 40 cm, half the circumference of the oesophagus with a clinically estimated 50–75% response (Figure 4). Restaging CT still demonstrated oesophageal thickening but there was no evidence of other locoregional or metastatic disease.

Both the surgeon and the patient were concerned about inadequate fitness for surgery at routine review 4 weeks after completion of chemoradiotherapy. CPET was unable to be performed due to COVID-19 restrictions. A home exercise regimen and weight loss program was targeted at improving lung function and exercise tolerance. Clinical reassessment at 12 weeks post-chemoradiotherapy confirmed a 12-kg weight loss (BMI 35 kg/m2) and an improved performance status, such that the patient and surgeon both agreed fitness had improved sufficiently to proceed to surgery.

Limited documentation regarding the vascular anatomy of the foregut was available from the OLTx operation note. A formal CT angiogram of the abdomen was performed pre-operatively to define the arterial anatomy of the foregut after OLTx as well as the colon in anticipation of a possible requirement for an interposition graft. The gastroduodenal artery and right gastro-epiploic pedicle were patent, there was no appreciable right gastric artery, the anastomotic site of the hepatic artery was not evident, and the colonic supply was conventional. Mechanical bowel preparation was administered in case the colonic interposition was required.

An Ivor Lewis oesophagectomy was successfully completed, although the abdominal phase was prolonged due to dense adhesions. A liver transplant surgeon assisted in dissection of the graft and identification and preservation of the vascular pedicle. The thoracic phase was also complex with dense right pleural adhesions encountered, likely secondary to his post-OLTx pneumonia. Oesophageal mobilisation was complete, but dense adhesions prevented the safe dissection of the complete subcarinal nodal packet.

At follow-up 6 months after the oesophagectomy, the patient had experienced no post-operative complications. His BMI stabilised at 31 kg/m2 with satisfactory tolerance of oral intake and maintained pre-operative cardiopulmonary fitness.

All procedures performed in studies involving human participants were in accordance with the ethical standards of the institutional and/or national research committee(s) and with the Helsinki Declaration (as revised in 2013). Written informed consent was obtained from the patient.

A major surgical dilemma addressed in this case was assessing and optimising fitness for surgery in this patient. He was new to our health service, with all of his records stored inter-state. At the time of his treatment, the COVID-19 pandemic was at its first peak in our state. Aside from the potential risk of COVID-19 infection in an immunosuppressed patient, this brought a number of logistical difficulties including facility closures. The utility and predictive value of CPET in major intra-abdominal surgery is still debated, but may be considered to be the gold standard of objective measurement of operative fitness (12). However, assessment by an experienced clinician and patient self-assessment can also predict all-cause post-operative morbidity (13,14). A specific feature of this case was the decision to delay surgery due to post-neoadjuvant chemoradiotherapy fatigue, allowing for prolonged exercise therapy and weight loss prior to surgery; our local dataset (unpublished) shows a 15% reduction in anaerobic threshold on CPET after neoadjuvant treatment. We hypothesise that this delay helped him to avoid respiratory complications despite a large thoracotomy and prolonged lung deflation due to dense adhesions. In this case, the pre-operative improvement in cardiovascular fitness was evaluated using a combination of quantitative and qualitative outcomes: increase in metabolic equivalent of tasks (METs) tolerated, oxygen saturation during exertion on stair climb, weight loss of 11 kg and patient self-assessment of exercise tolerance and perceived shortness of breath. A prospective study from the United Kingdom demonstrated increased surgical morbidity and early mortality following neoadjuvant chemoradiotherapy (15), while an American database review demonstrated increased frequency of pathological complete response (pCR) if surgical management of oesophageal adenocarcinoma was delayed beyond 90 days after completion of chemoradiotherapy (16). A second database study from the United States identified 85 to 98 days post neoadjuvant chemoradiotherapy as the timeframe associated with the highest rates pCR without significant change in morbidity, with the noteworthy limitation that most operations performed at 99 days or greater were delayed due to significant co-morbidities and complications of chemoradiotherapy (17). In combination, these data suggest that in patients with questionable fitness, there may be a role for prioritising exercise optimisation over traditional timing of surgical management.

pCR to chemoradiotherapy is a well-described phenomenon (23% in the CROSS study) (18), but there is currently no reliable way to confirm pCR pre-operatively (19). As a result, it is generally recommended to proceed to oesophagectomy in surgical candidates even in the setting of a complete endoscopic, radiologic and metabolic response. However, it is conceivable that the balance of risks and benefits of surgery versus observation in a high-risk surgical patient like this man may favour the latter if a complete clinical response is suspected or demonstrated pre-operatively. A further complicating factor in this man is post-transplant immunosuppression, which presumably alters the interaction between tumour and host, and perhaps more broadly his entire tumour biology. Hence, it is difficult to provide a prognosis to this man, despite his pCR.

One of the major strengths of this case is the potential applicability of prioritising cardiopulmonary optimisation to oesophagectomy in patients with other significant comorbidities, however this is not the only consideration for post-transplant patients specifically. A key limitation with this case is its applicability to patients in centres without a surgical transplant service. While delayed surgery and cardiopulmonary optimisation played a role in this patient’s surgical fitness, the presence of a specialist transplant surgeon and transplant anaesthetic team undeniably modified the risk of adverse surgical outcome.

In summary, GOJ adenocarcinoma is a complex problem requiring multi-disciplinary involvement and high-risk surgery in patients suitable for treatment with curative intent. Similarly, the treatment of post-OLTx patients is complex. There are insufficient data to guide treatment decisions when dealing with a patient who has both. Clinicians should maintain a high index of suspicion for development of a wide variety of malignancies post-OLTx. This case demonstrates the feasibility of neoadjuvant chemoradiotherapy followed by delayed surgery, where appropriate, to allow for optimisation cardiopulmonary and generalised operative fitness in a significantly comorbid patient with potentially resectable cancer post-transplant. Despite being at higher risk than the general population, post-OLTx patients are still potentially suitable for multi-modal interventions including neoadjuvant systemic therapy and major surgery in high-volume centres and can achieve good outcomes.

Reporting Checklist: The authors have completed the CARE reporting checklist Available at http://dx.doi.org/10.21037/dmr-20-134

Conflicts of Interest: All authors have completed the ICMJE uniform disclosure form (available at http://dx.doi.org/10.21037/dmr-20-134). The authors have no conflicts of interest to declare.

Ethical Statement: The authors are accountable for all aspects of the work in ensuring that questions related to the accuracy or integrity of any part of the work are appropriately investigated and resolved. All procedures performed in studies involving human participants were in accordance with the ethical standards of the institutional and/or national research committee(s) and with the Helsinki Declaration (as revised in 2013). Written informed consent was obtained from the patient.