The presentation of bowel ischemia is non-specific so early recognition and diagnosis is challenging. Delay in diagnosis leads to bowel infarction, intra-abdominal sepsis, multi-organ failure and death. A high index of clinical suspicion is essential.

Traditionally, it is common practice to measure serial serum lactate levels to identify and diagnose acute ischemic bowel. However, in recent years, studies have shown that there is a lack of evidence to conclude that serum lactate is elevated early and that it is sensitive enough to correlate with bowel ischemia (5,6).

We describe three patients who developed ischemic bowel after angioembolization for lower gastrointestinal bleeding who have minimal rise in serum lactate levels.

A 64-year-old man presented to the Emergency Department (ED) with abdominal pain and per-rectal bleeding. His abdomen was soft, tender over left lower quadrant with no generalized peritonism. Computed tomography (CT) mesenteric angiogram performed showed active contrast extravasation in one of the hepatic flexure diverticula, keeping with an acute bleed of the right colic artery. Angioembolization of right colic artery was performed. 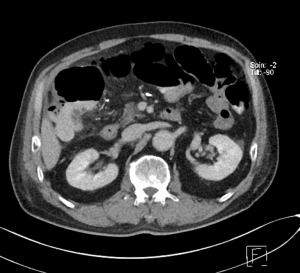 Figure 1 Gas along the wall at the hepatic flexure is suspicious for pneumatosis coli.

He underwent emergency laparotomy which revealed pus at right paracolic gutter. The caecum and ascending colon were dilated with gangrenous changes seen at hepatic flexure. A right hemicolectomy was performed and he made an uneventful recovery.

An 84-year-old lady presented to the ED with melena and lower abdominal discomfort. Her abdomen was soft and non-tender on clinical examination. CT mesenteric angiogram showed active hemorrhage within the proximal descending colon, with contrast extravasation during selective inferior mesenteric artery (IMA) runs, against a background of diverticular disease.

She underwent angioembolization of proximal branch of IMA as distal embolization was difficult due to patient movement and spasm associated with bleeding. Superior and inferior collaterals were left intact. Again, serum lactate levels were trended after the angioembolization procedure and remained unremarkable at 1.3 to 2.1 mmol/L. Despite that, she developed persistent abdominal pain and leucocytosis.

CT mesenteric angiogram was repeated within 24 hours and it revealed non-enhancing descending colon and proximal sigmoid colon with intramural gas pockets, Figure 2. There was gas tracking along the mesenteric vessel, particularly around the area of embolization and into the portal venous radicles in the left hepatic lobe. 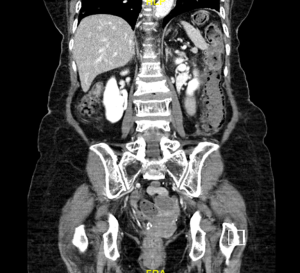 Figure 2 Entire segment of the descending colon up to the splenic flexure appears non-enhancing with intramural gas pockets.

Frank colonic ischemia from the splenic flexure down to the rectosigmoid junction was discovered intra-operatively during emergency laparotomy and Hartmann’s procedure was performed. She recovered well after that.

A 37-year-old man, presented to the ED with passing of fresh blood. He had no abdominal pain. Colonoscopy revealed pan-diverticulosis but no active bleeding was seen. He was discharged but re-presented 2 days later to the ED with large amounts of per-rectal bleeding and was hypotensive.

CT mesenteric angiogram showed that there was no extravasation demonstrated on the arterial phase images. However, there was progressive hyperdensity within the hepatic flexure of the colon with intraluminal distension suggesting late arterial or venous hemorrhage. He underwent angioembolization of hepatic flexure artery. Post-procedure, serum lactate level was 1.2 mmol/L, within the normal range.

Repeat CT abdomen and pelvis revealed interval oedema of the hepatic flexure bowel wall with adjacent fat stranding. In view of recent embolization, underlying bowel ischemia could not be totally excluded although no intramural gas was detected. In view of these findings, an emergency laparotomy was performed. There was an ischaemic segment seen at hepatic flexure, corresponding to the site of angioembolization. He underwent a right hemicolectomy and was well after that.

The three cases show that ischemic bowel occurs in the absence of rising serum lactate levels (Table 1). Their clinical characteristics have been summarised in Table 2.

It used to be thought that, as a result of ischemia and hypoperfusion, intestinal cells undergo anaerobic respiration and release lactate into the circulation.

Raised serum lactate as a marker of bowel ischemia had been supported by studies performed in the past (7). However, it has been increasingly recognised that serum lactate is not adequate as a marker for bowel ischemia (8). It is likely that, for serum lactate in the circulation to be raised, the amount of lactate released into the circulation needs to exceed the capacity for it to be metabolized. Also, if there is sudden total arterial circulatory obstruction as in the cases of selective angioembolization, there is lack of lactate clearance from the corresponding segments of ischemic gut back into portal circulation.

It has also been postulated that bowel ischemia leads to increased growth of bacterial flora which then causes increased D-lactate to be released. Increase in levels of D-lactate is thought to be more sensitive and specific however, the increase is not early enough and there is a lack of comparative studies for D-lactate and L-lactate in the context of acute bowel ischemia. Usually, the serum lactate level that is measured in the critical care setting does not differentiate between the two stereoisomers (5).

Other newer markers of injury to intestinal mucosa are currently being studied, such as intestinal fatty acid binding protein (i-FABP). This protein is released from damaged enterocytes found at the tip of intestinal villi and can be detected in serum. Other markers studied include a-glutathione S-transferase, amylase, acid-base status, base excess, C-reactive protein, interleukin-6, creatinine kinase and D-dimer although none have conclusively been shown to be definitive (10).

In a patient who had undergone angioembolization for lower gastrointestinal bleeding, there should be a clinical suspicion for development of ischemic bowel as a complication. Imaging studies such as an urgent abdominal CT with IV contrast has been recommended to confirm the diagnosis early, so that further management can be instituted quickly (8). A lack of increasing lactate levels should not exclude the diagnosis of bowel ischemia.

The authors would like to thank Dr. Suresh B. Babu, interventional radiologist, for his contributions to the article for the imaging studies.

Provenance and Peer Review: This article was a free submission to the journal. The article was sent for external peer review.

Conflicts of Interest: All authors have completed the ICMJE uniform disclosure form (available at http://dx.doi.org/10.21037/dmr-20-51). The authors have no conflicts of interest to declare.

Ethical Statement: The authors are accountable for all aspects of the work (if applied, including full data access, integrity of the data and the accuracy of the data analysis) in ensuring that questions related to the accuracy or integrity of any part of the work are appropriately investigated and resolved. Permission has been granted from the patients for their information to be published for research and education purposes. DSRB ethics approval has been obtained.