In this report, we shared a case with GC who received laparoscopic-assisted distal radical gastrectomy, which is one of the most commonly used surgical methods for GC in the First Affiliated Hospital of Guangxi Medical University. We present the following case in accordance with the CARE reporting checklist (available at http://dx.doi.org/10.21037/dmr-20-66).

A 57-year-old lady was admitted to our hospital due to abdominal distension accompanied by vomiting for more than 1 month. There was no relevant family history or past history for this patient. Upper endoscopic examination showed an ulcer with a diameter of 3 cm at the gastric angle, and biopsy was performed (Figure 1). As a result, gastric adenocarcinoma was confirmed by pathology (Figure 2). Multi-detector computed tomography (CT) of the abdomen was performed after the intravenous administration of contrast material, which showed the presence of the annular thickening of gastric wall in the pyloric region of the gastric antrum. The thickest area is about 1.7 cm in depth, and the lesion is about 4.8 cm long. CT examination revealed gastric antrum carcinoma (Figure 3). And preoperative stage was considered as T3N2M0. On August 7, 2019, Laparoscopy-assisted distal gastrectomy was performed under general anesthesia. 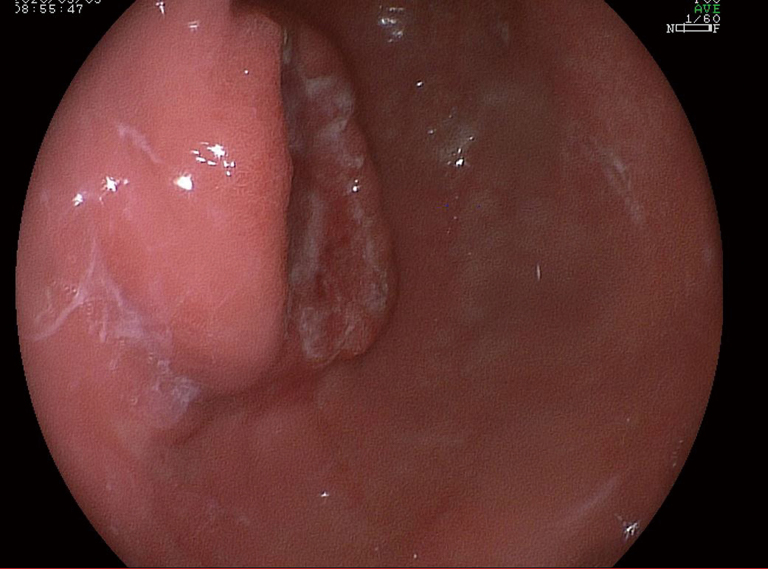 Figure 1 The results of endoscopic examination. 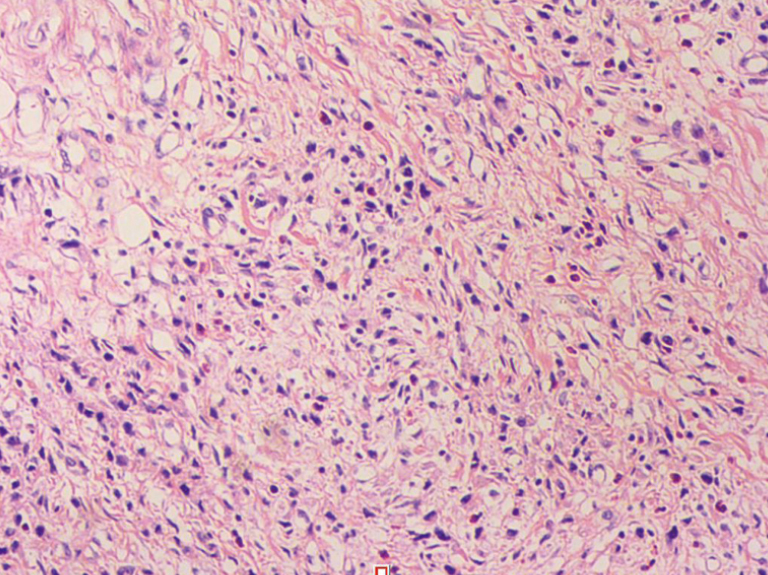 Figure 2 The results of pathological examination. HE (hematoxylin-eosin) staining, 200×. 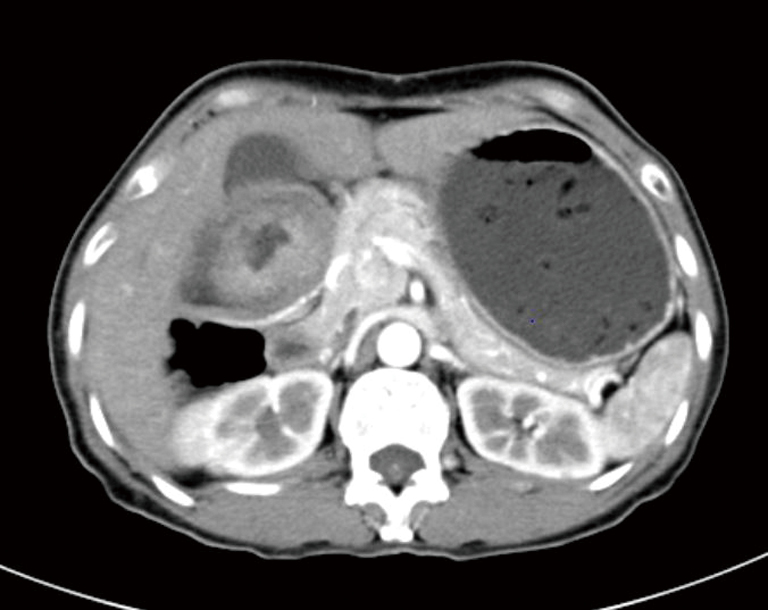 Figure 3 The results of CT examination.

We communicated with the patient and her family member. We got their oral permission if the name and face was not present. But no written consent was signed.

After admission, routine examination before surgery was performed for the patients (Table 1). There was no evidence of distant metastases or other surgical contraindications on preoperative examinations. Thus, laparoscopic-assisted distal radical gastrectomy was planned. GC patients are often prone to gastrointestinal bleeding, and associated with malnutrition because of tumor progression and a reduction in nutritional intake (5). So, we tried to provide patients with perioperative nutritional support under the concept of enhanced recovery after surgery (ERAS). We asked the patient to refrain from drinking and fasting for 6 hours before surgery, but to take 250 mL of sugary carbohydrates 2 hours before surgery to reduce the state of hunger, thirst, and anxiety. Because it can reduce the intraoperative traumatic stress response (6). Additionally, replenishing vitamins, electrolytes and micronutrients, and improving preoperative nutritional status were conducted to increase the tolerance to surgery. 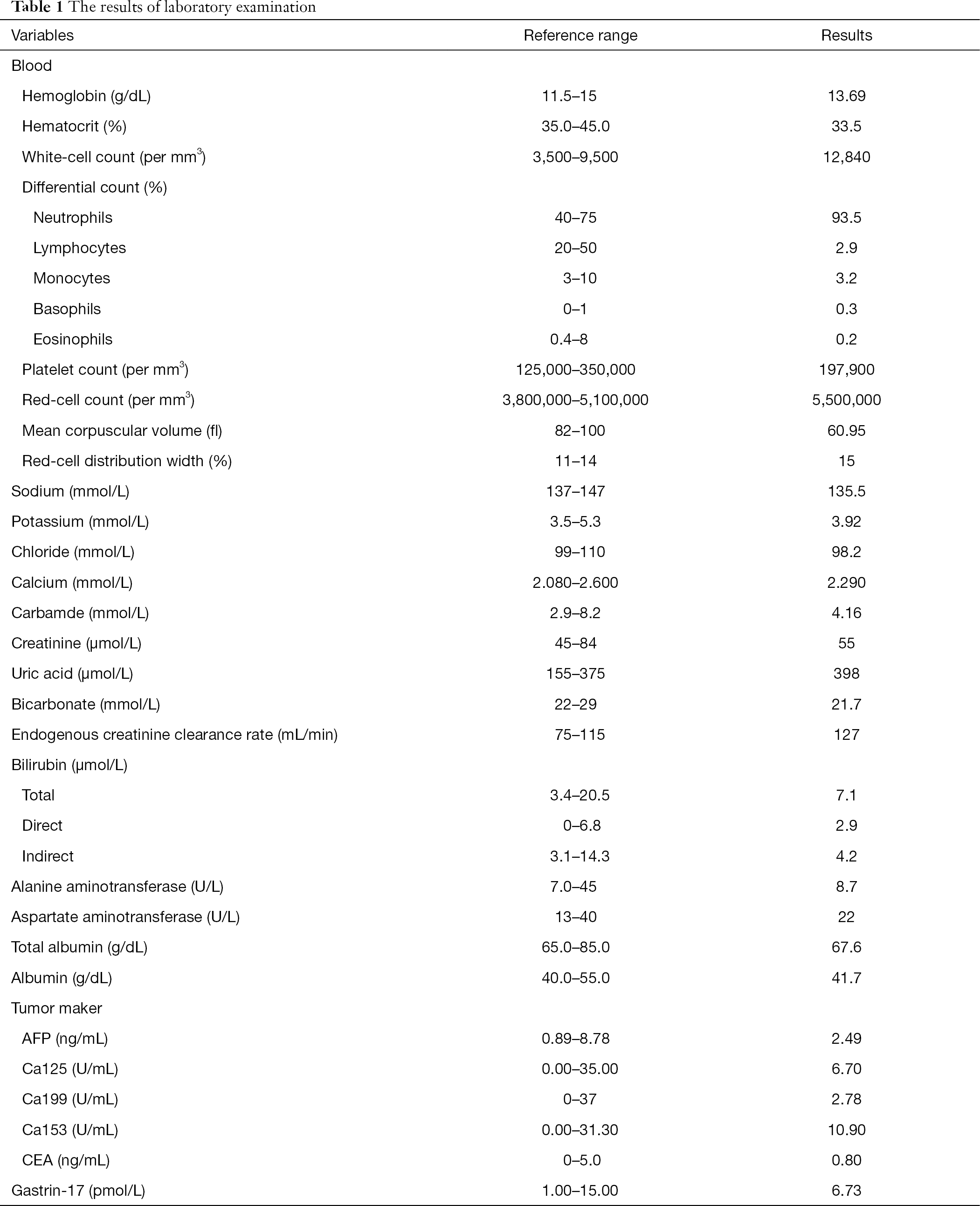 During the surgery (Video 1), five trocar ports were created to facilitate optimal views of the operation and placement of instruments. One initial 10 mm trocar port for a 30-degree high definition video laparoscope was inserted below the umbilicus. Carbon dioxide pneumoperitoneum was instituted through the umbilical trocar and the pressure was set at 12 mmHg. A 12 mm trocar was introduced into the left pre-axillary line below the costal margin as a main operating port. Another three 5 mm trocars were created in 5 cm above umbilicus along left midclavicular line, 5 cm above umbilicus along right midclavicular line, and below the costal margin along the right pre-axillary line, respectively.

Firstly, a routine exploration of the abdominal cavity was performed to confirm the resectabilty by using the 30-degree high definition video laparoscope. No tumor seeding, no distant metastasis and no malignant ascites was detected.

Secondly, the greater omentum was separated along the border of the transverse colon to the splenic flexure with an ultrasonic scalpel (Johnson & Johnson). Next step was to divide the gastrosplenic ligament, the left gastroepiploic vessels were then transected at their origins for clearance of lymph node No. 4sb. First of the short gastric vessels was cut and No. 4sa lymph nodes were cleared. The greater curvature of the stomach was transected to the precut level. Denuded the gastrocolic ligament to the right side until the root of the right gastroepiploic vessel. Then we denuded, ligated and cut the right gastroepiploic vessel, and removed the infrapyloric lymph nodes (No. 6). The edge of the duodenum was denuded and the duodenum was transected with an endoscopic linear stapler. Along the upper-edge of the pancreas, we separated the common hepatic artery and removed the lymph nodes (No. 8) around it. Towards the right we cleared the lymph nodes (No. 8) around proper hepatic artery, and the right gastric artery was cut at the root during the process. Towards the left, we exposed the left gastric vein, celiac trunk, left gastric artery and the proximal side of splenic artery, cut the left gastric vein and artery at their root, and removed the lymph nodes around these vessels (No. 7, 9 and 11d). From posterior gastric wall, we proceeded to resect the lesser omentum along the liver edge to the esophagogastric junction with an ultrasonic scalpel, then the right cardial nodes (No. 1) and the nodes along the lesser curvature (No. 3) were dissected.

Upon removal of the pneumoperitoneum, an auxiliary incision of about 6 cm was made in the middle of the upper abdomen. A lap-protector was used to prevent contamination and tumor seeding in the wound. The stomach was pulled out of the abdomen, then was divided along the upper edge, which was about 8 cm to the tumor. Billroth II gastrojejunostomy plus a side-to-side jejunojejunostomy (Braun’s anastomosis) was performed to reconstruct the digestive track. And the anastomotic stoma was checked carefully to make sure no stenosis or bleeding. Two drainage tubes were placed routinely after surgery, one was under the right liver and the other was in the spleen fossa. Trocar ports and abdominal incision were then closed, and the operation was completed.

The whole operation lasted 212 minutes, and the amount of bleeding was 50 mL. No blood transfusion was performed during the operation. Gastric poorly differentiated and diffused adenocarcinoma was confirmed by postoperatively pathologic examination. The tumor infiltrated into the subserosal layer with vessel invasion, but without perineural invasion. Nine positive nodes (9/24, 37.5%) were found. According to the pathological results, the stage was considered as (pT3N3aM0, IIIB).

Reporting Checking: The authors have completed the CARE reporting checklist. Available at http://dx.doi.org/10.21037/dmr-20-66

Conflicts of Interest: All authors have completed the ICMJE uniform disclosure form (available at http://dx.doi.org/10.21037/dmr-20-66). The authors have no conflicts of interest to declare.

Ethical Statement: The authors are accountable for all aspects of the work in ensuring that questions related to the accuracy or integrity of any part of the work are appropriately investigated and resolved. All procedures performed in studies involving human participants were in accordance with the ethical standards of the institutional and/or national research committee(s) and with the Helsinki Declaration (as revised in 2013). Oral informed consent was obtained from the patient for publication of this study and any accompanying images.