TFEB, a master regulator of lysosome biogenesis and autophagy, is a new player in alcoholic liver disease

Lysosomes play a major role in cellular metabolism and human health. Lysosomes are main catabolic organelles of the cell and play a central role in cellular processes including autophagy, plasma membrane repair, cellular clearance and cell signaling (1). Lysosomal dysfunction has been associated with several diseases including degenerative disorders of the brain and muscular system (1). Among other regulators of lysosome function, transcription factor EB (TFEB) stands out the most as it regulates both lysosome biogenesis and functions such as autophagy, lysosomal exocytosis, macromolecule degradation and mTOR signaling (2) (Figure 1). 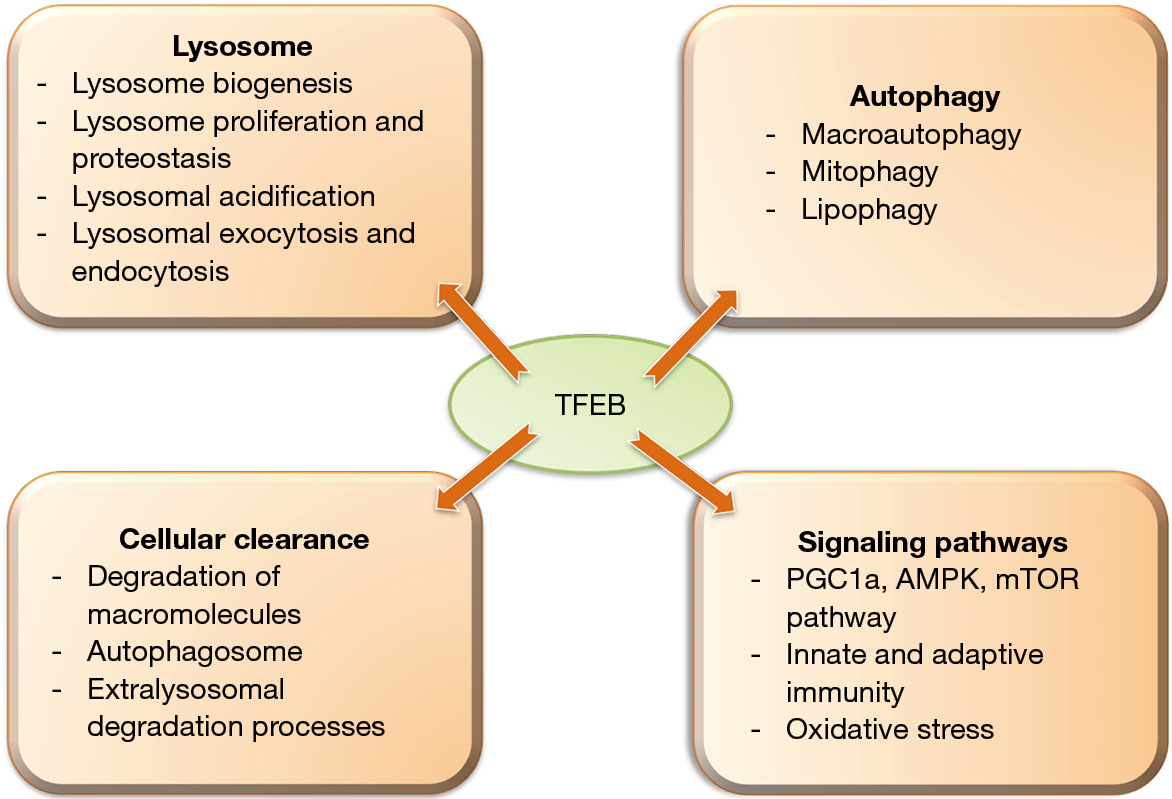 TFEB induces the transcription of various lysosomal genes by binding to a 10-base E-box like sequence at the promoter region termed as coordinated lysosomal expression and regulation (CLEAR) (2). TFEB activity is regulated at the various levels including post-translational modifications and protein-protein interactions. TFEB is largely cytosolic and inactive in resting cells under nutrient-rich conditions (3). However, during starvation and in stress conditions such as caused by ethanol treatment or lysosomal dysfunction, TFEB translocates to the nucleus to regulate the transcription of its target genes (4).

Both TFEB sub-cellular localization and activity are regulated by the phosphorylation status of two serine residues (Ser142 and Ser211) (5). Phosphorylated TFEB remains inactive in the cytoplasm, while dephosphorylated form translocates to the nucleus to regulate gene expression of its target genes. In nutrient-rich conditions, kinases such as mechanistic target of rapamycin complex 1 (mTORC1) and extracellular signal-regulated kinase 2 are known to phosphorylate TFEB (6). Surprisingly, mTORC1 mediated phosphorylation of TFEB takes place at the lysosomal membrane (6).

Starvation studies have revealed that TFEB also controls its own transcription by binding to CLEAR motifs (3). PGC1α, a master activator of mitochondrial proliferation, regulates TFEB expression and PGC1α is also a direct target of TFEB (3). PGC1α regulates TFEB transcription via PPARα/retinoid X receptor α (RXRα) heterodimer co-binding to the promoter region of TFEB and this phenomenon can be mimicked by the PPARα agonist, gemfibrozil (7). Other transcriptional factors that regulate TFEB transcription are the fed-state sensing nuclear receptor farnesoid X receptor (FXR) and the fasting transcriptional activator cAMP response element-binding protein (CREB) (7). Among miRNAs, miRNA-128 was shown to regulate TFEB directly. Overexpression of miR-128 caused a decrease in TFEB expression and consequently down regulation in CLEAR lysosomal genes, suggesting optimal levels of TFEB are required for lysosomal function (2).

TFEB has been shown to modulate autophagy, lipophagy and mitophagy (8). Overexpression of TFEB enhances the degradation of autophagy substrates and also shown to fasten the clearance of lipid drops and damaged mitochondria (3). TFEB also promotes lysosomal exocytosis for the cellular clearance (9). Since TFEB regulates processes like lysosomal biogenesis, autophagy and lysosomal exocytosis, therefore, it is able to modulate various cellular degradative pathways.

Impaired TFEB signaling plays a causal role in the pathogenesis of numerous degenerative storage diseases (2). Since TFEB is involved in various cellular clearance pathways, it is an attractive therapeutic target for various human diseases including those associated with cellular storage disorders (neurodegenerative diseases such as Parkinson’s and Alzheimer’s). Preclinical studies in mice to improve lysosomal function or biogenesis based on restoration of TFEB expression have been carried out for several diseases (1).

In a recent issue of Gastroenterology, Chao et al. demonstrated the role of TFEB in lysosome biogenesis and autophagy in a chronic ethanol plus single acute binge mouse model of alcoholic liver disease (11). Liver tissues from mice on Lieber DeCarli ethanol diet for 10 days plus a single acute binge (termed as NIAAA model) showed reduced levels of total and nuclear TFEB compared to controls. Further, hepatocytes of ethanol fed mice exhibited reduced autophagy and lysosome biogenesis and increased mTOR activation (11). Autophagy flux was studied using GFP-LC3 transgenic mice in the NIAAA binge model in the presence or absence of leupeptin, a lysosomal inhibitor. The number of GFP-LC3 puncta were found to be increased in the hepatocytes of ethanol feeding plus binge mouse group and leupeptin treated mice showed further increases in these puncta, suggesting that blocking lysosomal degradation blocks basal autophagy in the liver. Ethanol treatment showed an increase in the endogenous protein levels of LC3-II, which were further augmented in the presence of leupeptin. However, Chao et al. found that ethanol alone did not change the hepatic protein levels of p62, which were increased in leupeptin alone or leupeptin plus ethanol group. Authors postulated that enhanced p62 accumulation in leupeptin plus ethanol treated mice could be due to either impairment in the lysosomal/autolysosomal functions or reduced lysosome numbers (11). Consistent with the hypothesis, ethanol treatment caused a decrease in the lysosome numbers in hepatocytes as quantified by LAMP1 positive vesicles/puncta. An increase in the percentage of GFP-LC3 green puncta in the livers was found in the co-localization studies of GFP-LC3 puncta with Lamp1. These results suggest an insufficient number of lysosomes to fuse with autophagosomes. Because TFEB is a master regulator of lysosomal biogenesis (2), the possible involvement of TFEB in decreased lysosome numbers was examined. Chao et al. revealed that ethanol treatment not only caused a reduction in total and nuclear TFEB proteins but also decreased in its transcriptional activity as demonstrated by a decrease in the mRNA levels of its target genes (TEFB, ATP6VID and PGC1a). Nuclear TFEB staining was also decreased in the livers of alcoholic patients.

To determine the mechanism by which ethanol is affecting TFEB, they checked mTOR levels, a regulator of TFEB. mTOR levels were increased in the livers and in the lysosomes with a concomitant decrease in LAMP1 and TFEB after ethanol treatment. Increased mTORC1 activity was further confirmed by the phosphorylation status of its substrate proteins, S6 and 4EBP1, and increased phosphorylation of these proteins was observed in mice after ethanol treatment. The role of mTOR was further affirmed in in-vivo studies where Torin1, an mTORC1 inhibitor, improved ethanol-induced insufficient autophagy as evidenced by an increase in the numbers of hepatic GFP-LC3 puncta and endogenous LC3. Interestingly, Torin treatment only partially recovered ethanol-induced decrease in hepatic TFEB levels and its target genes (ATP6V1D, ATP6V1H and PGC1α), suggesting a potential role of other kinases in TFEB regulation. Attenuation in ethanol-induced liver injury and steatosis was observed after Torin treatment whereas leupeptin treatment augmented the disease severity.

To overcome this problem, authors knocked down TFEB acutely in the mouse livers using an adenovirus (Ad) shRNA approach. Mice receiving Ad-shRNA TFEB showed higher ALT and severe steatosis and increased hepatic neutrophils infiltration than mice that received control viruses, revealing a role of TFEB in ALD. Liver-specific TFEB and TFE3 knockout (DKO) mice exhibited a decrease in PGC1α protein, increased serum ALT levels and increased hepatic infiltration of neutrophils compared to their matched WT littermates after ethanol diet. These results suggest a compensatory role of TFE3 in ALD. As a gain of function, TFEB was overexpressed in the liver using an adenoviral vector approach. TFEB overexpression significantly attenuated ethanol-induced liver injury and steatosis and hepatic infiltration of neutrophils compared to control vector treated mice. Also, ethanol-induced impairment in hepatic mitochondrial bioenergetics and State 3 respiration was found to be increased in TFEB overexpressing mice. Since TFEB regulates lipid catabolism via PGC1 α, Chao et al. checked the expression of genes involved in this pathway and found that ethanol- induced decrease in the hepatic mRNA levels of fatty acid beta-oxidation genes (CPT1α, ACOX1, MACD, LCAD, and PPARα) was significantly improved in TFEB overexpressing mice. Whereas mice with TFEB knockdown of showed a further decrease in these genes after ethanol treatment. Altogether, these results suggest a fundamental role TFEB in lysosomal biogenesis and mitochondria bioenergetics in this model of ALD (Figure 2). Therapeutic strategies to maintain optimal TFEB levels to mediate normal lysosomal biogenesis might be a new avenue for ameliorating alcoholic liver disease. Further studies in other models of alcoholic liver disease, chronic alcohol administration and alcoholic hepatitis in mice as well as in-depth analysis in human alcoholic liver disease and alcoholic hepatitis should help to clarify the role of TFEB and autophagy in different forms of alcohol-induced liver damage.

The authors thank Candice Dufour for expert assistance in preparation of this manuscript.

Funding: This work was supported by National Institutes of Health Grant R01 AA020744 (to G.S.).