Does the Consensus Molecular Subtypes classification add to selection of precision medicine in patients with metastatic colorectal cancer?

World-wide 1.8 million new colorectal cancer (CRC) patients are diagnosed every year (1) and almost half are sooner or later diagnosed with metastatic disease (mCRC). At the turn of the century several randomized trials showed that doublet chemotherapy improved efficacy considerably with response rates close to 50%, median progression-free survival of 8 months and median overall survival close to 24 months, compared to 12 months when 5-fluorouracil (5-FU) monotherapy was the only option (2-4). Therefore, combination therapy (irinotecan with FU followed by oxaliplatin with FU or the opposite) became the global standard of care. Targeted therapy—biologically active antibodies interfering with specific signalling pathways upregulated in cancer cells—became the next step forward. Soon a doublet or occasionally triplet chemotherapy regimen in combination with bevacizumab (which binds circulating vascular endothelial growth factor A) or cetuximab or panitumumab (which block the epidermal growth factor receptor) became the standard of care but subsequently there has been considerable dispute in the oncologic society which of the two types of targeted agent and which backbone chemotherapy that should be the preferred first-line treatment for patients with RAS wild type (RASwt) (3).

Three randomised studies were completed to once and for all provide an answer, but it is important to emphasize that during the inclusion periods of these randomized trials the selection of patients for anti-EGFR therapy matured from unselected to KRAS exon 2 wild-type (KRASwt) to strictly RASwt and the studies did at first sight not reach a uniform conclusion (5-7). In the initial FIRE-3 paper, 752 patients were randomized to FOLFIRI plus cetuximab or FOLFIRI plus bevacizumab and in (at that time) the appropriate subgroup of 592 patients with KRASwt the authors found no differences in response-rate or progression-free survival but patients treated with FOLFIRI-cetuximab had a significantly prolonged survival (28.7 vs. 25.0 months) (5). In the subgroup of 400 RASwt patients, survival was even longer in the FOLFIRI plus cetuximab group as compared to the FOLFIRI plus bevacizumab group (33.1 vs. 25.0 months) (8).

However; these results could not be confirmed in the CALGB/SWOG 80405 (CALGB). In CALGB, 2,334 patients were randomised to 1 of 3 treatment groups. Among these 1,137 patients was confirmed KRASwt and were randomized to chemotherapy (75% FOLFOX and 25% FOLFIRI at the discretion of the patient and physician) in combination with either cetuximab or bevacizumab. No difference in survival for KRASwt patients (30.0 vs. 29.0 months) was seen, and even in the analysis of the extended RASwt population (526 patients) no difference between cetuximab and bevacizumab could be found (7).

Thus, expanded RAS analysis did not result in unanimity, however further subgroup analyses according to RASwt and tumour sidedness, concluded that cetuximab or panitumumab were more effective for left sided primaries (9).

During the same period, the search for more prognostic and predictive markers, which could guide us in the use of personalized therapy, continued. However, still only the RAS status and to some degree BRAF status have been identified as clinically useful in the selection of first-line therapy. In contrast, several, unfortunately rare, markers (e.g., MMR status, NTRK and other fusion proteins, HER2 amplification) have been found to be clinical valuable after first-line therapy (4,10).

With optimal first and later line of therapy, an important increase in median survival especially in patients with left sided primary tumors and RASwt disease well above 30 months is seen. Unfortunately, the same improvement in patients with RAS mutated mCRC have not been seen. Thus, there is a need for new agents and predictive markers in this substantial large group of patients. There has also been plentiful research for predictive markers in the field of anti-angiogenic therapy but so far without any success in the selection of first-line therapy (3). Even though more predictive markers are needed, the treatment for mCRC has changed from “one strategy fits all” to a more personalized approach taking into account both clinical and as well molecular parameters. However, despite the important progress in the treatment of mCRC patients there is still a need of identifying new biologically and clinically relevant predictive markers to further improve the outcome of patients with mCRC.

For the last decade a number of different classification systems have been suggested to increase the understanding of the underlying biology of CRC and to group patients into comparable treatment groups based on prognosis and optimal therapy. In 2015, the CRC Subtyping Consortium published the Consensus Molecular Subtypes (CMS), based on the gene expression of the tumour cells and that of cells in the tumour microenvironment from 6 different classification algorithms, and ended up with 4 different subtypes (11). The CMS consists of:

To aid in the selection of therapy, the German AIO group in collaboration with a number of dedicated experts outside the AIO most recently did an unplanned analysis to assess the value of CMS subtyping for patients included in the FIRE-3 study (12). The intention-to-treat group for this sub-study was 592 KRASwt patients, 514 specimens were available for analysis and the group succeeded in classifying a large portion of patients (438 patients). The CMS classification was prognostic with the longest survival in CMS2 (median survival 29.0 months) followed by CMS4 with a median survival of 24.8 of months. The shortest survival of only 15.9 month was seen in the CMS1. 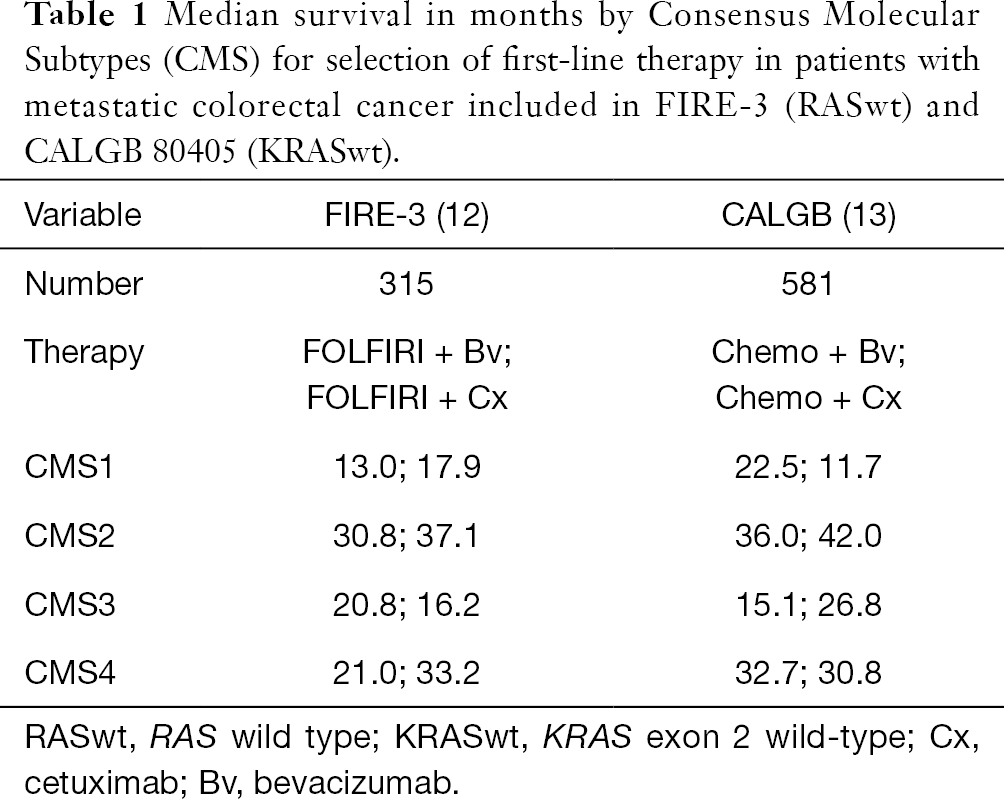 Thus, Stintzing and colleagues concluded that CMS can divide patients in different prognostic groups, and that the classification gives us insights into biology, but presently CMS has no role in clinical decision-making.

The CMS classification was not designed to be prognostic or predictive but is was a clustering of known but different classification systems and virtually all patients included in the original CMS publication had early stage disease (11). Despite this reluctance, the prognostic and predictive value of CMS has been evaluated in a few studies in patients with mCRC (Table 2).

In the original publication, Guinney et al. showed that the survival after relapse was shortest for patients in CMS1 and patients in CMS2 had the best outcome (11). The same prognostic findings were unanimous found in the published studies (Table 2) confirming the prognostic value of CMS classification in patients with mCRC. It would however be of great interest to evaluate the OS in CMS1 for patients that have been exposed to immunotherapy.

In contrast, there are much more inconsistency in the utility of the CMS classification for prediction of optimal therapy both for targeted therapy and for chemotherapy regimen.

In the adjuvant NSABP C07 study (17), patients in CMS4 had the worst prognosis and there seemed to be a benefit of oxaliplatin in CMS2, but this finding could not be confirmed in the MOSAIC trial (18). In the metastatic setting in a retrospective trial of mCRC patients it was found that irinotecan-based therapy was more effective than oxaliplatin-based therapy in CMS4 group (16).

In the randomized MAX trial, patients were randomized to chemotherapy (capecitabine or capecitabine with mitomycin) with or without bevacizumab (15). The authors found less effect of bevacizumab in CMS1 and CMS4 and that, patients with the epithelial subtypes (CMS2 and CMS3) benefitted from addition of bevacizumab. The proposed hypothesis of less benefit of anti-angiogenesis in CMS1 and CMS4 is that an upregulation of tumor associated macrophages and cancer associated fibroblast exhibit distinct angiogenic effects that do not respond to treatment with bevacizumab (19).

In CAIRO2, 755 patients were randomized to chemotherapy (capecitabine plus oxaliplatin) and bevacizumab with or without cetuximab. Among 314 patients with KRASwt tumors, no significant difference in progression-free survival between the two treatment groups were seen (14). However, in a smaller group with 95 patients with epithelial-like (CMS2 and CMS3) and KRASwt and BRAfwt tumors, the addition of cetuximab prolonged median survival from 23 to 33 months.

Some of the difficulties in the interpretation of FIRE-3 and other studies may be caused by inherent problems in retrospective trials. The CMS classification is based on analysis of the primary tumor and there is a shift in classification from the primary to metastasis (20-22). In future studies, it is thus important to include translational research including sequential biopsies for understanding the development in tumor characteristics during the metastatic process and during the treatment pressure. Furthermore, another potential limitation is that the CMS classification has been shown to vary according the site of sampling and this intra-tumor heterogeneity may challenge the robustness of the CMS classification and in addition there may be difference between tumor center and the invasive front and between the primary and metastasis (20-22).

Finally, when retrospective studies tissue-based studies are done, there is potential bias as patients from whom no material is available may constitute of a different prognostic group as shown in a study of an unselected patient cohorts, where patients without available tissue micro array had a worse outcome (23), and in most of the studies of the CMS classification in the mCRC setting only material from half of patients were available thereby introducing the risk of significant bias.

We applaud FIRE-3 for their huge effort to provide further important insight into the biology of CRC, to enhance our knowledge on prognostic and predictive markers and to attempt to identify which mCRC patients most likely will benefit from bevacizumab or cetuximab as first-line treatment. Unfortunately, from a clinical point of view, CMS classification presently does not add to the selection of treatment to patients with mCRC. However, more data are needed to identify the fundamental biologic drivers of CRC, and to make another step forward we need prospective trials.