Colorectal cancer (CRC) is a common malignant tumor of digestive tract, and its morbidity and mortality maintain an upward trend in the world (1,2). With the rapid development of our social economy, the residents of western-style diet and environmental pollution, CRC incidence will still continuous increase in a period time, become one of the most common malignant tumor in endanger to people's health in our country (3). At present, the targeted therapy of CRC has made significant progress, but still has not achieved satisfactory efficacy, and therefore better targeted drugs are needed.

Chemotherapy is one of the middle-late main treatment for CRC. The cytotoxic drug, oxaliplatin, is a first-line chemotherapy drug for CRC beginning in 2000 (4). It not only improves the objective remission rate but resection rate of Colorectal metastasis tumor (mainly for liver metastasis), and also has extended the overall survival (OS) (5,6). However, tumor intrinsic or acquired drug resistance can still against oxaliplatin killing effect. In the clinical work, we found that the sensitivity of the CRC patients on oxaliplatin chemotherapy varies widely, Some patients are insensitive or even tolerant to chemotherapy (7). Therefore, it is an urgent problem to further study and explore the combination of molecular targeted drugs and chemotherapy to provide safe and effective chemotherapeutic sensitizing drugs for clinical use.

Oxaliplatin is a third-generation platinum analog of the 1,2-diaminocyclohexane family, mainly forms platin-DNA admixture through binding with intracellular DNA, causing DNA damage and resulting in cell death to achieve the purpose of treatment (4,8). However, tumor cells can activate their own DNA damage repair mechanism for damage repair and thus generate chemotherapy resistance. DNA damage repair mainly includes homologous recombination (HR) and nonhomologous end joining (NHEJ) (9-12). Oxaliplatin can induce DNA cross-links and result in DNA double-strand breaks (DSBs) (13,14). After DSBs are induced by irradiation or cytotoxic drugs, H2AX is rapidly phosphorylated. In this case, there is always a considerable number of gamma histone variant H2AX (γ-H2AX) formed per DSB (15).

According to the synthetic lethal theory, both DNA damage repair methods must be inhibited in order to specifically killing tumor cells (16,17). XRCC2 is a key protein involved in HR repair and has been proved in previous studies to be able to predict the efficacy evaluation of CRC radiotherapy (18,19). Poly(ADP-ribose) polymerase 1 (PARP1 has an influence in NHEJ repair and is essential for the outcome of PARP1 inhibitor monotherapy (20). Inhibitors of PARP1 augment the levels of persistent single-strand breaks that lead to DNA DSBs upon replication (21). Our object of this research was to observe the features of the sensitizing impacts of a PARP1 inhibitor on oxaliplatin treatment for XRCC2 deficient CRC for potential clinical application.

Several plasmids with lentivirus as the main component were selected. Each plasmid has a short hairpin RNA (ShRNA), which was mainly purchased from RiboBio Co., Ltd. (Guangzhou, China). Their main function is to target human XRCC2. The main function of nonsilencing (vector) shRNAs were to serve as negative control. Human XRCC2 targeted shRNAs infected SW480 cells (22,23). Stable clones will only be obtained after cells transfect SW480 cells in 6-well plate, each plasmid weighed 2 µg. After 48 hours, we will screen them for antibiotics with 2.0 µg/mL of puromycin. After 10 days, multiple clones from the same transfection were mixed together and was grown under the selection of puromycin. Finally, we need to use quantitative RT-PCR and western blots to detect the knockdown efficiency of XRCC2.

As we described earlier, we collected total RNA and carried out qRT-PCR (22). Real-time quantitative PCR was conducted based on SYBR Green I (Invitrogen) having an ABI PRISM 7500 system (Applied Bio systems, Foster City, CA, USA). The housekeeping gene GAPDH (glyceraldehyde-3-phosphate dehydrogenase) was employed as an internal control. All experiments were performed at least in triplicate.

Based on the manufacturer’s guidance, cell proliferation detection was estimated with the help of the Cell Counting Kit-8 (CCK-8) cell proliferation kit (Dojindo Laboratories, Kumamoto, Japan). In a few words, cells were classified into four parts: controls; olaparib (1 µmol/L); oxaliplatin (20 µg/mL); as well as olaparib (1 µmol/L) + oxaliplatin (20 µg/mL). Cells were inoculated into 96-well plates under the condition of 5×103 cells/well and 100 µL of complete medium, and then cultured under normal conditions. We will set a fixed time to incubate the cells with 100 µL of rpmi-1640 medium, plus M+10 µL of CCK 8 reagent, at 37 °C for 2 hours. Then, absorbance was measured on a microplate reader (Bio-Rad, La Jolla, CA, USA), and finally the wavelength was 450 nm. Three independent repeated experiments will be carried out.

A previously reported immunofluorescence protocol was used (19,25), with some modifications. After the cells were attached to the chamber slides (Nest, Wuxi, China) on the 24-well plate, they were respectively contacted with olaparib (1 µM) and/or oxaliplatin (10 µM) for 6 hours. At various timepoints following exposure to olaparib and/or oxaliplatin (0, 0.5, 12, 24 and 48 hrs), the cells were washed 3 times with PBS respectively and then fixed in 4% paraformaldehyde at room temperature. Waited for 20 minutes to achieve the effect of cell infiltration. During the whole experiment process, in the first stage, soaked with 0.2% TritonX-100 for 30 min, then rinsed with PBS for 3 times, and finally sealed with 10% goat serum for 60–90 min. In the second stage, coverslips were incubated with anti-γ-H2AX monoclonal antibodies (Cell Signaling Technology). We diluted 1:100 in 1% BSA/PBS/0.1% Tween solution overnight at 4 °C, washed 3 times with PBS, and incubated with Dylight 594 affinity goat anti-mouse IgG (Abbkine, Redlands, CA, USA), the experimental environment was mainly at room temperature in the dark. Waited for 60 minutes, washed with PBS for 3 times, and stained with 2 µg/mL 4',6-diamino-2-phenylindole (DAPI) for 3 min in the dark. Finally, the slide was installed with anti-fading agent and tested with confocal microscope (Zeiss, Germany). In each sample, in a high-power field, the γ-H2AX focus number of each core was counted by an auto mated focus counter, and an average of 100 nuclei were analyzed.

Briefly speaking, exponentially growing cells were seeded into 6-wellplates (2,000 cells/well) and cultivated at the condition of 37 °C with 5% CO2 lasting for 10–14 days. Colonies were fixed with 75% ethanol lasting for 30 minutes and then were stained with 0.5% crystal violet (Beyotime, Nanjing, China) for visualization and counting. There were only colonies of more than 50 cells using manual counting. Each group of cells included three wells, and all experiments were repeated three times. 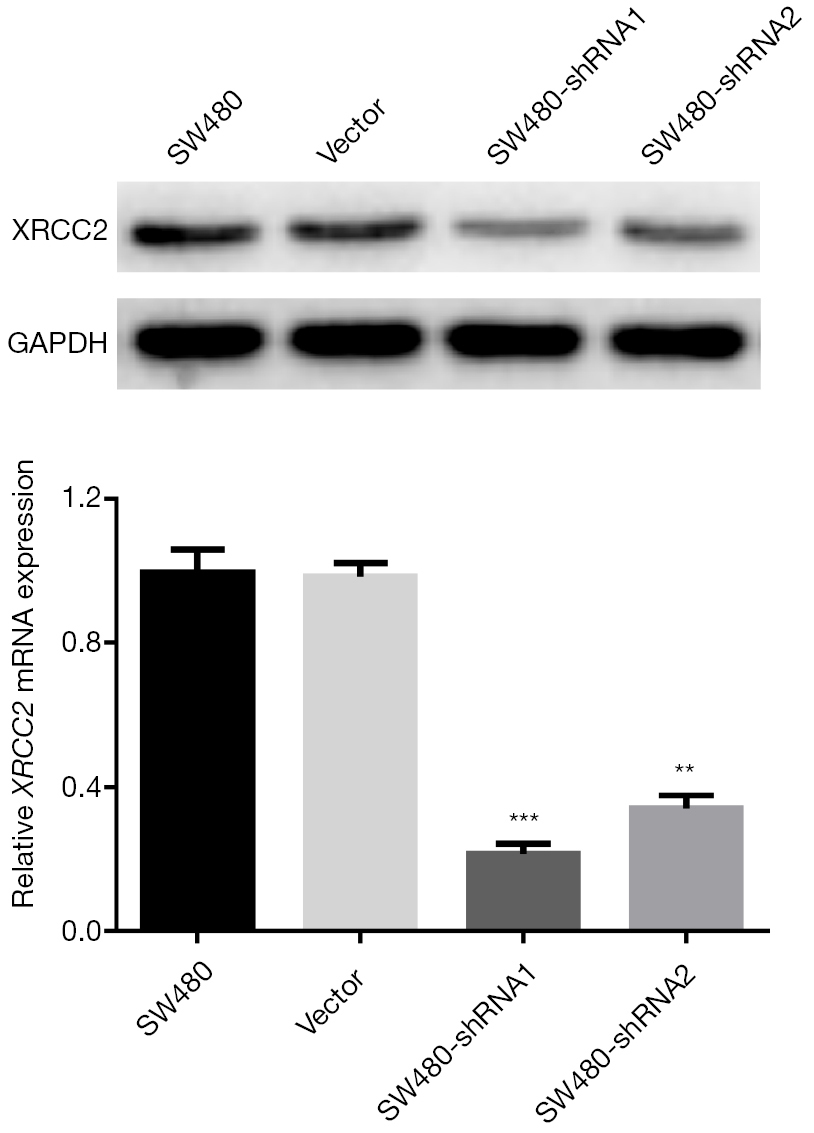 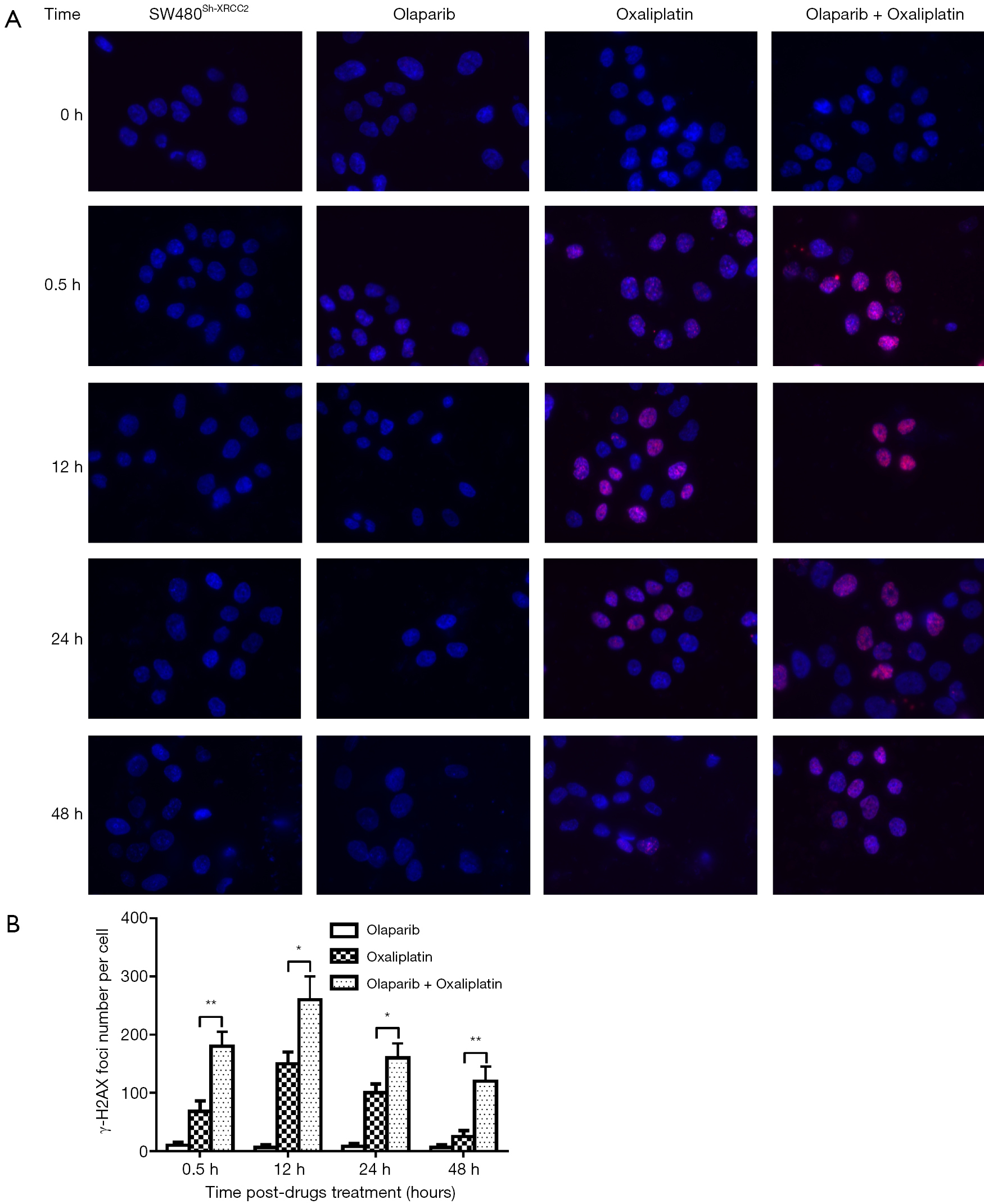 Figure 2 SW480Sh-XRCC2 cells with or without olaparib exhibit impaired repair of oxaliplatin-induced DNA DSBs. (A) The levels of immunofluorescence that were observed in a phosphorylation of H2AX (γ-H2AX) assay. Images of γ-H2AX foci were obtained 0, 0.5, 12, 24 and 48 h after treated olaparib and/or oxaliplatin was applied to SW480Sh-XRCC2 cells. (B) The average number of γ-H2AX foci per nucleus was calculated based on the number of γ-H2AX foci that were detected in more than 100 cells for each treatment group. The error bars represent the SD from three independent experiments. Statistical differences between the numbers of γ-H2AX foci in the SW480Sh-XRCC2 cells treat with olaparib and/or oxaliplatin 0.5, 12, 24 and 48 h after drugs treatment were calculated (*, P<0.05; **, P<0.01). DSB, double-strand break. (Immunofluorescence staining ×400). 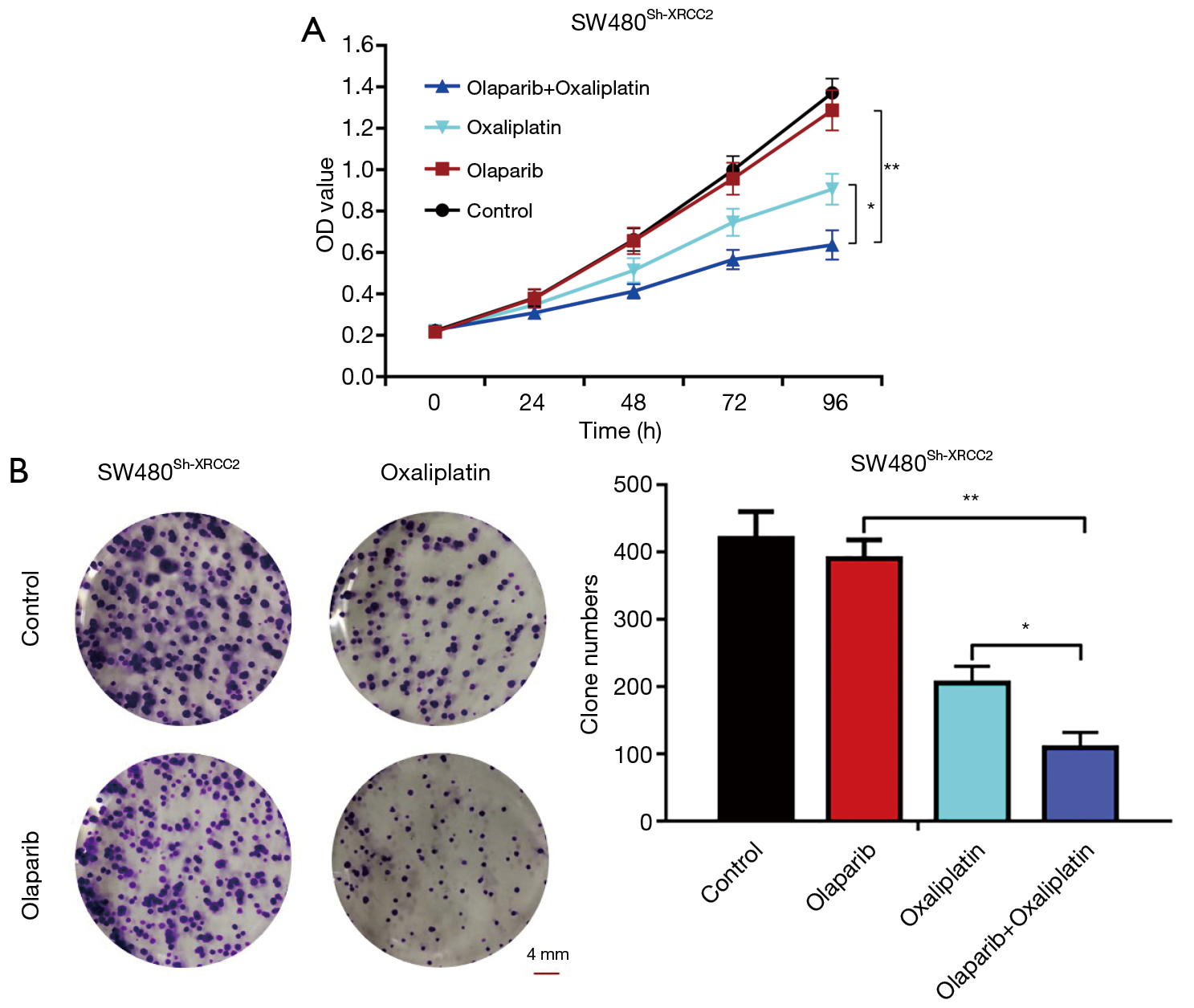 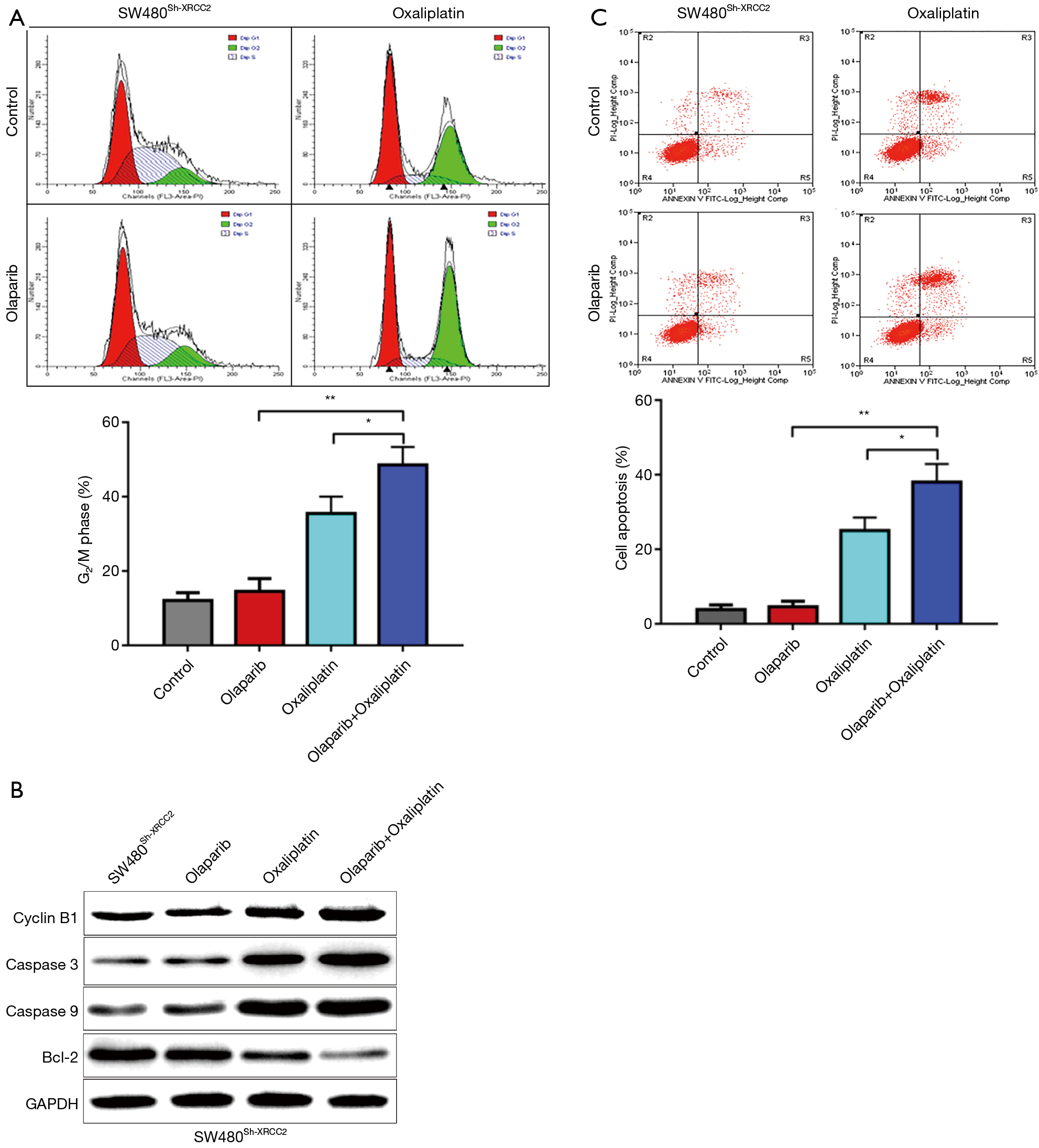 Figure 4 Effects of olaparib and/or oxaliplatin on the cell cycle and cell apoptosis of SW480Sh-XRCC2 cells. (A) Flow cytometry analysis of the proportion of the cells indicated in each stage of the cell cycle (G1, G2 and S) and the percentage of cells in the G2/M phase of the cell cycle were quantified and expressed as the mean ± SD from three independent experiments. The cell cycle distribution of SW480Sh-XRCC2 cells following exposure to olaparib and/or oxaliplatin. (B) Detection of cyclin B1, caspase-3, caspase-9, and Bcl-2 protein levels by Western blotting. Detection of GAPDH was used as a loading control. (C) Levels of apoptosis in SW480Sh-XRCC2 cells following exposure to olaparib and/or oxaliplatin. The cells were stained with Annexin V and PI. *, P<0.05; **, P<0.01. PI, propidium iodide; GAPDH, glyceraldehyde-3-phosphate dehydrogenase.

Combination of olaparib and oxaliplatin enhanced apoptosis in SW480Sh-XRCC2 cell

Previous researches show that increasing XRCC2 expression advance the invasive behaviors along with metastasis processes of CRC (22). Our previous studies have found that patients with high XRCC2 expression are sensitive to radiotherapy and chemotherapy (19,22). However, Can drugs increase the sensitivity of XRCC2-deficient CRC patients to chemotherapy and radiotherapy? A variety of PARP1 inhibitors have been investigated in recent years. Olaparib can be defined as a bioavailable inhibitor of PARP1, and some clinical trial based on olaparib has been recorded. Studies have shown that after oral administration of 100 or 200 mg, the plasma concentration of olaparib can reach 11.5 mL, but the two dosages will not cause dose-limiting toxicity (26). When investigating the impact of a PARP1 inhibitor, Vilar et al. (27) discover that the MRE11 cell line combined with harboring biallelic mutations were more sensitive to veliparib than wild-type cell lines. In the whole process of this study, we persist in using 1.0 µM olaparib (under the guidance of the results of our previous survey). We mainly compared the influence of olaparib and/or oxaliplatin on XRCC2 gene knockdown SW480 cells. After comparison, we discovered that olaparib has cytotoxic impact contrasted to the control group. Besides, the research results also show that the combination of oxaliplatin and olaparib can significantly improve the killing effect of oxaliplatin. Thus, for the treatment of patients with XRCC2 deficiency, the combination of PARP inhibitor and oxaliplatin has broad clinical application prospects.

Researchers have the same view that γ-H2AX lesion is a good sign of DSBs. In this case, we can use anti-γ-H2AX antibody to count the lesions in cells, so as to achieve the purpose of detecting DSBs. Therefore, we detected γ-H2AX levels after treatment with the combination of olaparib and oxaliplatin (28-30). Although Chan et al. (31) discovered that PARP inhibition alone did not induce a statistically obvious increase in γ-H2AX expression in vitro or in vivo. Immunofluorescence results indicts that olaparib connected with oxaliplatin generated the most foci among all the groups, and the speed of repaired of DSBs in olaparib combined with oxaliplatin group was slowest compared with oxaliplatin group. These results shown that the sensitizing impact of olaparib for oxaliplatin may be connected with the induction of DSBs.

In conclusion, the results of this study demonstrate that olaparib and oxaliplatin have a synergistic effect on the capacity to repair DNA DSBs and proliferation ability of XRCC2-deficient CRC cell, which caused more γ-H2AX formation, more G2/M phase cells arrest and more cells apoptosis. Our findings suggest that combined treatment with olaparib and oxaliplatin could be a desirable method for clinical chemotherapy in XRCC2-defecient CRC, although further investigation is needed.