Pancreatic ganglioneuroma: a rare entity with a difficult approach: a case report and systematic review

Ganglioneuroma is a rare benign tumor arising from neural crest cells in the sympathetic ganglia and adrenal medulla; it represents the well differentiated variant of neuroblastoma and, like that, is more frequent in child and young adults. Its most frequent localization is the mediastinum and the retroperitoneum (1). Ganglioneuromas are usually asymptomatic until they grow up enough to give compression symptoms. Preoperative diagnosis is very challenging: there is a lack of specific radiological findings and a correct cytologic diagnosis with fine-needle aspiration (FNA) requires expert and dedicated cytopathologist, being aware of the cytologic features of this lesion. Adequate clinical information and use of ancillary methods (e.g. , immunohistochemistry and electron microscopic examination) are also important in establishing a correct diagnosis (2), which is useful to select the adequate indication for surgery, helping in the choice between a demolitive operation or a simple resection.

Pancreatic localization of ganglioneuroma is very rare with less than 10 cases reported in literature. We reported a systematic review of literature about pancreatic ganglioneuroma, presenting a case of a young woman affected by this rare disease.

The methodological approach consisted of: identification of the selection criteria, definition of the search strategy, assessment of the study quality, and extraction of the relevant data, according to the PRISMA statement checklist for developing a systematic review (3). The study selection criteria were defined before starting the data collection in order to allow the proper identification of the eligible studies for the analysis. A literature search was performed using MEDLINE (through PubMed), EMBASE, and Google Scholar, using the key words “Pancreatic Ganglioneuroma”. The final search was completed on the 1st March 2018. Comparative and non-comparative studies, case reports and retrospective series reporting new cases of pure pancreatic ganglioneuroma have been included in this report, regardless of their size; composite ganglioneuroma were excluded. All titles and abstracts were assessed by three independent reviewers (MM, LM, SB) to select those focusing on pancreatic ganglioneuroma and its treatment. Full-texts of the selected articles were screened by the authors for eligibility. Reference lists of all the relevant articles were screened in order to identify additional articles that could have been potentially useful for the purposes of this study.

The following inclusion criteria have been used: (I) acknowledged as an original article, (II) full-text published in English. The following variables were extracted from each study: patients’ features (age at initial diagnosis, gender, geographical origin), presenting symptoms, radiological examinations performed, pre and post-operative cyto/histological features, surgical treatment and postoperative complications. Any disagreement between the three reviewers during the study selection process was resolved following discussion with a fourth reviewer (CLB). The Grading of Recommendations Assessment Development and Evaluation (GRADE) system was used to grade the “body of evidence” emerging from this review (4).

A 30 years old woman with a BMI of 47 kg/m2, without relevant comorbidities, came to our attention complaining of left abdominal pain with suspicion of kidney stones. The physical examination did not reveal any relevant findings. The contrast-enhanced (CE) CT scan showed an ovoid retroperitoneal mass with 70 mm of maximum diameter, in close contact with pancreatic tail (Figures 1 and 2). CEMRI confirmed the presence of a mass probably originating from left adrenal gland. Gastric EUS showed the presence of a retroperitoneal, irregular, multilobular mass, separated from left kidney and adrenal gland, involving the pancreatic tail and enveloping the splenic artery; no enlarged lymph-nodes were found. The mass did not show contrast-enhancement at color-doppler. EUS-FNAB, using 20-gauge Procore® needle, was positive for muscle cells and nerve fibers (S100+), suggesting its soft tissues origin. In addition, tumor (CA 19.9, CEA) and hormonal markers were normal after complete metabolic-endocrine evaluation of the pituitary and adrenal gland axis. The amylase value was normal without signs of pancreatitis. 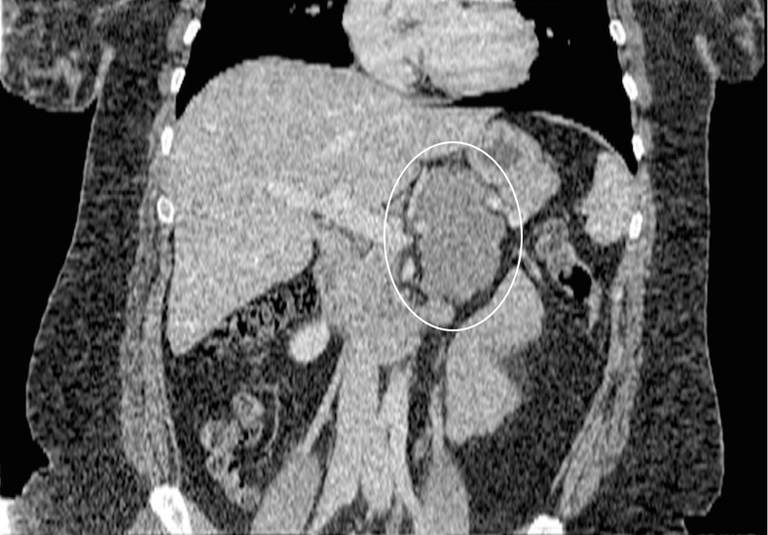 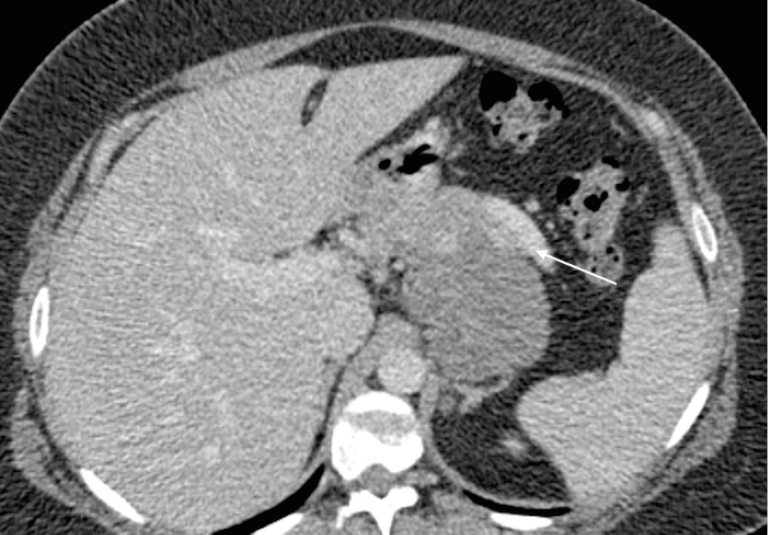 Although diagnosis was not so clear, after multidisciplinary board, surgery was indicated because of the patient complained of symptoms. A laparotomy with multiple intraoperative biopsies was performed. Intraoperative frozen sections showed mesenchymal origin of the mass with malignant aspects. Consequently, en-block resection of the mass with distal pancreatectomy and splenectomy and left adrenalectomy was performed. Definitive diagnosis was pancreatic ganglioneuroma.

Postoperative hospitalization ruled out without complications and the patients was discharged on ninth postoperative day. After two years follow-up she resulted disease free, without evidence of local recurrence or distant metastases.

The manual search and the crosscheck of the reference lists did not produce any other relevant article. A flowchart illustrating the study identification and inclusion/exclusion process is shown in Figure 3. The methodological quality of the included studies was scored according to GRADE system. No RCT was found; the included studies were significantly heterogeneous in their design, aims and methods. The selected studies reported a total of 5 patients with pancreatic ganglioneuroma (5 women), with a median age of 17 years (range, 3–33 years). Selected studies were performed in homogeneous populations: 3 European and 2 in Northern American. (USA); epidemiological characteristics were reported in Table 1. 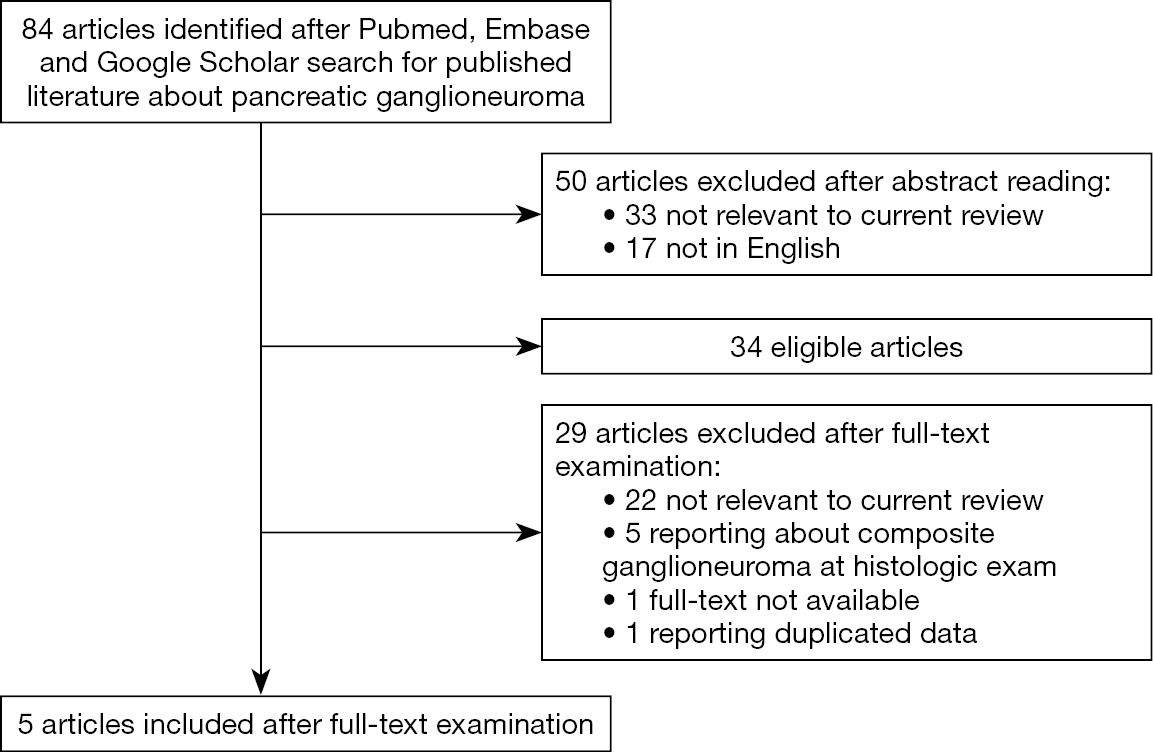 No data were reported about patients’ comorbidity, BMI, perioperative management and long-term outcomes. The main clinical and radiological patients’ features, the cyto/histological details of the lesions, the surgical treatment and the postoperative complications resulting from the literature review were reported in Table 2.

Ganglioneuroma is a rare benign tumor composed of gangliocytes, arising from sympathetic nerve fibers (1); it represents the most mature form of a broad spectrum of sympathetic neuroectodermal tumors (including neuroblastoma and ganglioneuroblastoma) originating from undifferentiated cells, Schwann cells, or ganglion-like mature cells (8). It affects more frequently older children and young adults with a slight female preference (2), and almost all the case are reported in people under 60 years with more than 60% of cases affecting people younger than 20 years (9).

Although it is often asymptomatic, being usually discovered as incidentaloma, sometimes it causes unspecific symptoms due to its slow-growing behavior, determining compression of the surrounding organs. In particular, in case of abdominal location, patients can complain nausea, vomiting, weight loss, epigastric discomfort and back pain. Rarely ganglioneuroma can also produce vasoactive intestinal polypeptide, androgenic hormones, and catecholamines causing flushing, diarrhea, and hypertension.

The most frequent location is the mediastinum (39–43%) and the retroperitoneum (32–52%), in particular the adrenal glands, but it is also described in neck and pelvis (8–9%) (2,10,11). Pancreatic involvement is unusual and very rarely reported in literature with only 7 cases described, only 5 of these concerning pancreatic ganglioneuroma. This aspect could be related to the hypothesis that this tumor originate from peripancreatic nerve fibers and should not be considered as a pancreatic tumor, creating quite confusion in definition and classification of this disease. Nevertheless some authors (1) assessed the convenience to define as pancreatic ganglioneuromas that cases in which the presence of invasion of pancreatic parenchyma impede to find a plane between the tumor and the parenchyma.

Pancreatic ganglioneuroma does not present specific radiological features. Ultrasonography (US) appearance is not specific; it usually shows a predominant homogenous mass with hypodense echogenicity and sharp delineated borders (12); US can be useful in localizing the origin of the mass and in visualizing the vascular relationship (11).

On CT ganglioneuroma shows low attenuation with poor enhancement on CECT, due to abundant amount of myxoid matrices and a relatively small amount of ganglion cell; furthermore, CECT seems the most sensitive exam in detecting fine speckled tumor calcifications (11,12). On MRI, T1-weighted images show a low signal intensity, whereas T2-weighted images show a heterogeneous high signal intensity (8). Pre-operative cyto/histological diagnosis, using FNA via EUS or percutaneous techniques, is rarely useful to choose the type of intervention between demolitive operation and conservative resection, because the presence of undifferentiated components cause important limitations (11).

Although diagnostic cytologic feature of ganglioneuroma was suggested (presence of spindle cells and ganglion cells in smears) and the absence of immature cells and necrosis/inflammation could help differentiating ganglioneuromas from their malignant counterparts (ganglioneuroblastomas and neuroblastomas), a correct assessment of malignancy of the lesion is very hard to obtain. Immunocytochemistry can help to establish the neurogenic origin of the tumor cells (2). The correct diagnosis of ganglioneuroma, especially for those arising from the pancreas, is often possible only at pathological examination with surgical excision of the tumor. Intraoperatively, pancreatic ganglioneuroma usually appears like a well-defined mass, without infiltrative behaviour, difficult to differentiate by non-functioning NET, mucinous cystadenoma, and solid-cystic papillary tumor (1); moreover, frozen section of the mass can provide disorienting results, as in our experience. In this review we found that pancreatic ganglioneuroma is a really rare benign tumor with only 5 cases reported in English literature, until March 2018. Among the five selected studies we observed a clear gender prevalence, being all the cases reported in women, with a median age of 17 years (range, 3–33 years).

The presenting symptoms were usually not specific including abdominal pain and discomfort, weight loss nausea and vomiting or palpable abdominal mass (7). In some cases diagnosis could be incidental, during radiological examination for other medical conditions. Among the reported cases, a correct pre-operative histological diagnosis of ganglioneuroma was obtained just in one case. Surgical treatment is the only way to obtain a clear diagnosis; it consisted of PD, central pancreatectomy and resection of uncinate process. Median hospital stays reported in literature was of 9.3 days, without post-operative complications reported.

In conclusion, pure pancreatic ganglioneuroma is a very rare benign tumor, affecting children and young adults. Its diagnosis is very challenging due to the lack of specific features at imaging exams and to the presence of confounding aspects at cyto-hystology. Surgical resection with negative margins is the main curative option and in most cases the only way to make a correct diagnosis.

Ethical Statement: The authors are accountable for all aspects of the work in ensuring that questions related to the accuracy or integrity of any part of the work are appropriately investigated and resolved. All procedures performed in studies involving human participants were in accordance with the ethical standards of the institutional and/or national research committee and with the 1964 Helsinki declaration and its later amendments or comparable ethical standards. Informed consent was obtained from the participant included in the study.